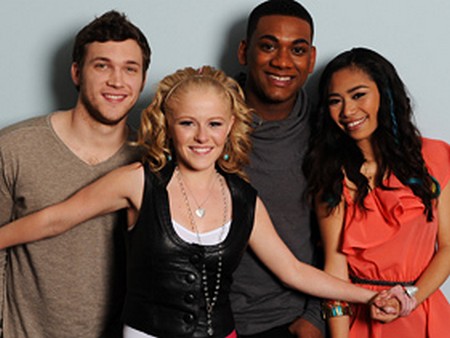 Tonight American Idol returns to Fox with the ‘Top 4? Performance Show and it is California Dreamin’ night.  Our Top 4 will take the stage and sing two songs each.  With only four contestants left the pressure is really mounting.  Stand by as we live blog tonight’s show with all the exciting up-to-the-minute details.  On last week’s show in the bottom were Hollie Cavanagh and Skylar Laine.  At the end the journey ended for Skylar and she was sent home.

If you missed the show you can read our full and detailed recap here.  If you missed any of the performances from last week you can see them here.

The contestants remaining in the competition are: Phillip Phillips; Jessica Sanchez;  Joshua Ledet and Hollie Cavanagh.  Leaked song list for the weeks is:  California Dreamin: “Have You Ever Seen the Rain” by Creedence Clearwater Revival;  “Steal Away” by Etta James; “You Raise Me Up” by Josh Grobana and “Faithfully” by Journey.  Songs You Wish You Wrote: “And I Am Telling You I’m Not Going” by Jennifer Holiday;  “I Can’t Make You Love Me” by Bonnie Raitt; “Volcano” by Damien Rice and “It’s a Man’s Man’s Man’s World” by James Brown.

Who are you excited to see perform tonight?    Now considering how much Hollie has been in the bottom two, my guess is that she will probably be the one given the boot.  Who are your rooting for?  Sound out in the comments and let us know!

On Thursday, special guest and former Idol 7 winner David Cook will perform his new single, “The Last Song I’ll Write For You” and Judge Jennifer Lopez will be performing that song where her boyfriend gropes her, again, “Dance Again”.

RECAP: After months of grueling competition, who is going to be the next American Idol? I have my money on Phillip or Hollie.  First up tonight is Phillip Phillips, the Idol hopefuls are listed in order of appearance

1. Phillip Phillips is doing every thing he can to win this thing, singing “Have You Seen The Rain” By Creedence Clearwater Revival.

Judges Comments: Randy: “It started off a little rough, you were trying to find your pitch, as soon as you got to the first chorus, it was sensational. Dude, if you have a good time, we have a good time and so do they”. Jennifer: “I felt like we had this new Joe Cocker quality, it was perfect, great job”. Steven: “You are living proof that the road to succes is always under construction”.

Wow, what an awesome performance, I definitely heard the “Joe Cocker” in Phillip’s voice, brilliant!

2. Hollie Cavanagh got axed during the “green mile” in season 10, but not this season, she is rocking it! Hollie sings “Faithfully” by Journey.

Judges Comments: Randy: “I am so amazed, you came back and you’ve been slaying us every week, you did Journey proud. Dude, you were right in the zone, Hollie wants to take this sing, she wants the whole thing Dawg”. Jennifer: “It makes me feel a little emotional, seeing how much you have grown, I’ve been waiting to see you sing and it was really very beautiful”. Steven: “I watched you two years ago, you have blossomed and you are so creative, your choice of song was over the top, just beautiful”.

Perfect, this one was simply “perfect”.

3. Joshua Ledet is another Idol hopeful that got turned away in season 10, but his rejection was during the auditions; thank goodness he  tried out again because he is clearly one of the top contenders in this season. Joshua is dedicating this song to his father, he is singing “You Raise Me Up” By Josh Groban.

Judges Comments: Randy: “I am really happy that you came back, if you are a great artist you can sing anything, everything that you do I am excited to see, you are going to have a gi-normous career”. Jennifer: “OMG,  this is going to be so interesting from now to the end, we have amazing singers. What can I say, another great performance, I loved the drama, really really great and please keep it consistent to the end”. Steven: “I’m really glad you got on that plane, you sang your little tush off, the world is accepting you like nobody’s business”.

Joshua gives me “goosies” every time, love this guy!

4. Jessica Sanchez has wanted to be on American Idol since she was five years old and never imagined to make it this far. Jessica is singing “Steal Away” by Etta James.

Judges Comments: Randy: “I love the whole vibe, you are 16 and singing Etta James, your vocals are ridiculous. You could sing the phone book, amazing”. Jennifer: “That was crazy, you are one of the best vocally”. Steven: “I loved it, you just nailed it, you showed the other side of your voice”.

The song was too old for her and there was a little too much “over” acting for my taste.

Joshua Ledet and Phillip Phillips get together to singing “This Love” by Maroon 5.

Judges Comments: Randy:”Best song, best duet, perfect”. Jennifer: “You both are so different, but this was perfect it was like Adam Levine and Usher coming together, it was an unexpected treat”. Steven: “It’s a great song, you guys brought a little something else to it, I loved it, it was amazing”.

Jessica Sanchez and Hollie Cavanagh swing together to sing “Eternal Flame” by The Bangles.

Judges Comments: Randy:”That was a little strange for me, you guys are powerful singers, for me I just didn’t like that, I thought it was wierd”. Jennifer: “I don’t think it was bad as all that, you both have sweetness and power”.  Steven: “You didn’t sing it like the guys, but you’ve turned into our favorite swingers (they were swinging while they sang, weird)”.

Plain and simple, it sucked!

Joshua Ledet, Phillip Phillips, Hollie Cavanagh and Jessica Sanchez sing “Waiting For A Girl Like You” by Foreigner.

Not my favorite performance, I didn’t find they were in melody.

SONGS THEY WISH THEY HAD WRITTEN

1. Phiilip Phillips is feeling good tonight, when he gets home – he can’t wait to jam with his friends. Jimmy thinks Phillip found the song that is like a bullseye and compares Phillip to a butterfly because he is really showing himself. Phillip is singing “Volcano” by Damine Rise.

Judges Comments: Randy: “This is what it is all about, you are your own guy, that right there, was one of your best performances on the whole season, amazing, so great”. Jennifer: “Very few people could pull that off, it is a real testament to who you are, for me it was one of the most beautiful poignant moments ever on Idol, it was really lovely”. Steven: “I agree with Jimmy, I heard the musician that time, I never heard you sing like that, I could listen to that song with headphones over and over again, that was beautiful”.

That was so ridiculously good! I could listen to with my headphones all night long.

2. Hollie Cavanagh is confident and she chooses to sing one of her favorite songs, “I Can’t Make You Laugh Me” By Bonnie Raitt. Jimmy does not want Hollie to over sing this; when she is in the song, she can pull it off and she has to do magnificent tonight.

Judges Comments: Randy: “It’s a great song, but it was wrong for you, you need things that are going to give you a moment, it didn’t do it for me”. Jennifer: “It’s easier to sing this kind of song when you have had your heart broken, but you are trying to make everyone love you – there was too much shaking in your vocals. I felt it could have been your best performance, but it didn’t happen for me”. Steven: “This song is all about how you can feel the song and I found it fell short.

I liked it, but she could have done better, too bad.

3. Joshua Ledet is really excited to be singing “It’s A Man’s Man’s Man’s World” by James Brown. Jimmy thinks Joshua is incredible and is going to kill this song.

Judges Comments: Randy: “You delivered us tonight, this is the greatest song for you and the best performance ever on any singing competition. If you want to know what singing is all about, just listen to Joshua Ledet”. Jennifer: “I thought we had seen everything you had to give, but we hadn’t”. Steven: “Neither man nor women have sang that good with such compassion ever on this show, I have never heard anything like that in my life”.

Joshua gets himself a resounding standing ovation! This guy is so ridiculously talented, this was more than an Idol performance.

4. Jessica Sanchez wants to crush it with this song, she doesn’t want to go home, she sings, “And I’m Not Telling You” by Jennifer Holiday. Jimmy says that he was so disappointed in Jessica’s “Proud Mary” rendition last week, that he put her in his bottom two; but this week, he thinks she is going to come back.

Judges Comments: Randy: “I don’t what is going on tonight, but you guys are really in it to win it. This is one of the hardest songs to sing, you are phenomenal, another great performance”. Jennifer: “It seems like it’s going to be a real race to the finish, there is nothing else to say, your vocal ability is not something you see every day, it was a real moment”. Steven: “Another winning performance, just over the top”.

The judges are a little slower to get up for Jessica than Joshua, but she gets a standing ovation. I’m not a fan, but that was beautiful, she did a very good job – definitely a “goosies” performance.

I can’t wait for tomorrow night, Phillip and Joshua were consistent with more amazing performances. Hollie did well, but I’m not sure if she did good enough. Jessica, well she redeemed herself after her “embarrassing and awkward” performance last week. It will be tough tomorrow night, don’t forget to come back for all the details.