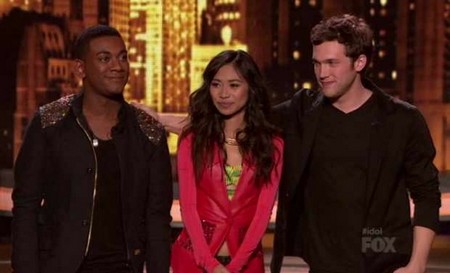 Tonight is another American Idol Results show and we are on our way to the finale.  After tonight the two contestants that will be fighting it out in the finale will remain.  Stand by as we live blog all the excitement with up-to-the-minute details!

We conducted a poll today to find out who our viewers thought would be going home tonight.  A surprising 40% think Jessica will be going home, followed closely by Joshua with 38% the votes.  If you have not entered our poll yet there is still time, go here!

On the performance show tonight the performers are: Idol’s own Season 8 runner-up Adam Lambert and Lisa Marie Presley.  Lisa will be singing “You Ain’t Seen Nothin’ Yet” from her record Storm & Grace, while Lambert will be breaking out his newest tune, “Never Close Our Eyes,” off of his forthcoming album, Trespassing.

RECAP: Tonight we find out who will battle it out next week for the finale. The finalist kick it off tonight with a rendition of The Beatle’s song, “Got To Get You In My Life.” Ryan asks everyone how they are feeling; Jessica says she is excited, Phillip says it’s a blessing and Joshua admits to being nervous.

Time to get to some results, Joshua Ledet is called to the center of the stage. First a look back at last night and Jimmy’s reaction; “Joshua had a good night last night, but not great with “I’d Rather Go Blind” and I thought the judges were too kind, overall it gets an 8 and certainly not a standing ovation for his first song. On his second song, “Imagine”, I found that it didn’t work because it was overblown, like putting a Ferrari on a racetrack and leaving it in first gear. Now for “No More Drama”, I thought something was missing, there just wasn’t enough melody. Does Joshua deserve to be in this finale, 100 percent he should be anyone’s finale.” Ryan was just teasing, no results yet.

Ryan plays a video for us of the top 4 Idol contestants visiting the “Ice Age – Contintental Drift” recording studio where they try their hand at recording of “Ice Age”, the movie hits theatres July 15th.

Now we get to see a little “Rock Royalty”, Lisa Marie Presley performs her newest single, “You Ain’t Seen Nothin’ yet”. The song is a little slow, but she looks really pretty and just like her famous father.

Up next, Jessica Sanchez is called to the center of the stage. Jimmy says, “Jessica’s song last night, “My All” did not give us enough, not a shock and awe moment. Her second song, “I Don’t Want To Miss A Thing”, the judges seem to feel that it all came togother in that moment, but she needs to have the most magical moment she has had to make it. On her last song, “I’ll Be There”, I choose this song because at times, at 16 years,s he reminds me of a young Michael Jackson, but she had two minutes to build to a peak, it hurt her, I think she is worthy of singing on the Grammys, if she makes it, it will be all about the songs.”

Three years ago, Adam Lambert was right on the Idol stage and landed in second place, tonight he is back as a special guest singing “Never Close Our Eyes,” off of his forthcoming album, Trespassing. The song is catchy and damn, he’s HOT!

The last hopeful on stage is Phillip Phillips and here is what Jimmy had to say, “Jimmy thought “Beggin” was a great job, entertaining and fun, Phillips sound is becoming more and more original. His next song, “Disease”, was a risk and I give it up to him for that, but this song was a total snooze fest and not strong enough to sing at this point in the competition. The last song, “We’ve Got Talent” was the best performance he has ever done and he won the night with this song, he hit notes I didn’t think he could hit, he dug down deep, I was genuinely knocked out.”

It’s time to see who is going home, Joshua Ledet, Phillip Phillps or Jessica Sanchez. My personal vote is going to send Jessica home, but what does America think? The first person to compete in the finale is Jessica and she is not the least bit surprised. This sucks, it’s between Joshua and Phillip.

What did you think of tonight’s show? Do you think Joshua, one of the most talented people on the show EVER, should have been voted out? Me neither. Sound off your comments below and tells us who you think should have been sent home and don’t forget to come back for the finale next week when we will be providing you with our AWESOME recap!