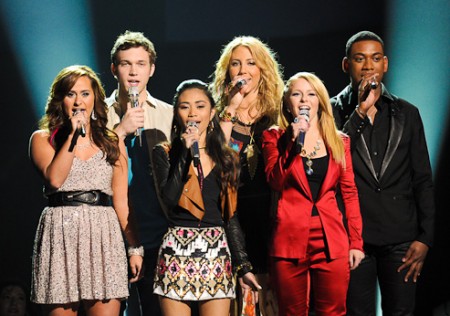 Tonight is another American Idol Results show – last night our ‘Top 6? performed songs from the Queen songbook.  After the last two weeks shocking results shows – it is clear no one is safe.  Two weeks ago Jessica Sanchez was in the bottom two and she was saved by the judges only save and last week Colton Dixon was sent home.  If we want to keep our favorites around, we have to vote – they need our votes!

On last night’s show we got a double dose of Idol when the contestants performed two songs.  One song was from the Queen songbook and included a medley with original Queen members Brian May and Roger Taylor. The other song was any they wanted song.  If you missed the performance video’s last night you can see them here!

Last night’s show was interesting I thought that at least one song for each contestants was great and one was so so.  My favorite of course was Jessica Sanchez who sang Queen’s ‘Bohemian Rhapsody’  she killed it, it was fantastic.  What did you think of her performance?

Guest performers tonight are Katy Perry who will perform “Part of Me.”  Stefano Langone will return to his former Idol home and perform his new single, “I’m On A Roll.” Then we’ll also get the Queen tribute, Queen Extravaganza, with Brian May and Roger Taylor coming back on stage again tonight for a performance of “Somebody To Love.”

RECAP: At this point in the competition, everyone has a chance to win, it’s up to the Idol hopefuls on if they make it or break it. By the end of the hour, the official top five Idols will be named. The Idols received a staggering 58 million votes last night.

First tonight, the Queen Extravaganza opens the show with “Somebody To Love.” Well, that was a strange experience, the guitarist did a back flip and no it wasn’t Brian May, it was a much younger dude and get this, the lead singer looks like Freddie Mercury! Great performance that received a standing ovation from our judges.

Time to get serious, lets get to the result and they are being called down two at at time tonight. The first two are Jessica and Elise. Jimmy Lovine thinks that Jessica’s version of “Bohemian Rhapsody” was a disaster but he loved when she sang “Dance With My Father Again”. Jimmy didn’t like either of Elise’s songs and thinks she has something to worry about tonight. Jessica is safe, Elise is in the bottom three.

Breaking news for the Idol live tour, tickets go on sale Friday, May 11th and one of the Idols that was in the show last year, Casey Abrams, is there with Ryan. Now we get some Idol entertainment before any more results, season 10’s Stefano Lagone sings his new single, “I’m on A Roll”. Nice song, it really has the audience rockin’.

Time for more results, Hollie and Joshua are called up to the stage. Jimmy thinks Hollie did a good job because Freddie Mercury is tough, she tripped up and got slightly out of tune, technically she was a b+. Now for her second song, “The Climb”, Jimmy thought she was fantastic. Now on to Joshua, Jimmy was really impressed last night, he knows how to interpret and change over, emotional and restrained, he had America right where he wanted them. Jimmy says, “If Joshua gets voted out tonight, there is something wrong with the competition, the whole ball of wax.” After the nationwide vote, Hollie reached new heights last week but tonight she is in the bottom, Joshua is safe.

We welcome someone now who is no stranger to chart domination, Katy Perry, she performs “Part Of Me”.

Skylar and Phillip are next to find out their fate. Jimmy thinks that Skylar did a very competent job on “The Show Must Go On”, but the second song, “Tatoos On This Town” was a little self indulgent and knocked her out in round two. Now it is time find out how Phillip did and Ryan introduces him as “Lady Killer”, Jimmy thinks that Phillip not feeling well is making an impact on his performance, it was missing something. Now, for the second song, “The Stone”, Jimmy thinks the judges had good points, but it left an opening for someone other than Phillip to be in the finale. Here we go, the person who takes the final spot in the bottom three is Skylar, Phillip is safe.

Elise Testone is in THE BOTTOM THREE

Hollie Cavanagh is in THE BOTTOM THREE

Skylar Lane is in THE BOTTOM THREE

Ryan is going to make it quickly a bottom two, he tells Skylar to get sit on the couches, it is between Hollie and Elise. Oh no, time to dim the lights, the person who leaves the competition tonight is Elise.