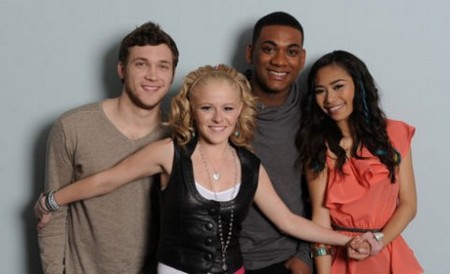 We are down to four hopefuls left on American Idol 2012 and only three weeks left to crowning the winner on May 23rd.  The four Idol hopefuls left are; Hollie Cavanagh, Joshua Ledet, Phillip Phillips, Jessica Sanchez and all of them couldn’t want it any more than they do.

Last week, Skylar Laine left the competition and unlike Colton Dixon and Elise Testone, Skylar left with a positive and grateful attitude.

This week, the final four will be taking the stage for a “California Dreamin’” themed performance. Idol producer, Nigel Lithgoe announced on Twitter that the contestants first song would be from bands or singers from California and second, songs “I wish I had written” (or FREE choice).

On Thursday, special guest and former Idol 7 winner David Cook will perform his new single, “The Last Song I’ll Write For You” and Judge Jennifer Lopez will be performing that song where her boyfriend gropes her, again, “Dance Again”.

Now considering how much Hollie has been in the bottom two, my guess is that she will probably be the one given the boot. But, I really hope Jessica goes home, she is not ready for this competition and after her embarrassing and awkward performance of “Proud Mary” last week, she should definitely go.  See Jessica’s Proud Mary performance here.

We would love to know what your predictions are, sound off your comments below and tells us who you think deserves to stay and who should be given the boot.