American Idol Top 6 Spoilers – What Will They Sing? 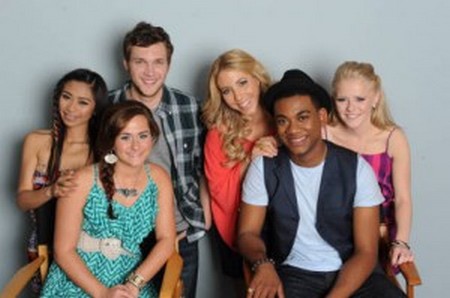 American Idol fans everywhere take note that we are down to the top six – are you as excited as I am? Last week, we had an amazing performance show and a tense results show.  Colton Dixon headed home and according to his recent tweet something good is about to happen for the Christian singer, “:-):-):-). I’ve got exciting news that you guys will find out soon;-)!!!!!”  Sadly it won’t be happening on Idol!

I am really looking forward to this week’s surviving top 6 singers do their best to make America love them.  The Idol hopefuls will be singing classic songs by British rock sensation, Queen. It’s nice to see the contestants pay homage to a true artist, Freddy Mercury, who sang lead vocals for the classic group. Queen had eighteen albums that went to number one, so the contestants will certainly have a lot of songs to choose from their pretty massive song book. In another surprise, contestants will be performing with band members, guitarist Brian May and drummer Roger Taylor, original members of the legendary rock group.

We learned this week that Freddie-fill-in Adam Lambert will not be joining the new Queen on Idol as he has a gig already planned on Jimmy Kimmel. Adam probably wasn’t intended to join them for this performance anyway, as it is intended to promote the Queen Extravaganza and Adam isn’t a part of that, it’s a totally separate project that he has with Queen. If you’re missing Adam like me, he has his own slot on Idol in a few weeks’ time.

During last week’s episode, the judges didn’t feel that the contestants all made good song choices, With that in mind, it will certainly be interesting this week to see if they all take the judge’s advice and deliver a slammin’ performance.

Producer, Nigel Lithgoe confirmed via Twitter that the contestants will sing one Queen song and another song of their choice.

Special guests this week will be pop sensation, Katy Perry, who will be performing her new song “Part of Me” and Idol season 10 alum, Stefano Langone, who placed seventh on the tenth season of Idol, will debut his first single “I’m on a Roll.”

I think the Top Six should start the show singing iconic Bohemian Rhapsody and if I were to choose which songs each hopeful would sing, here would be my top picks:

Elise- I Want To Break Free

Joshua- Somebody To Love

Hollie- These Are The Days Of Our Lives

Philip- Another One Bites The Dust

Jessica- Who Wants To Live Forever

Hollie & Skylar- Friends Will Be Friends

The official tribute band Queen Extravaganza will be heating up the results stage as well and they are not your average cover band, the group was personally assembled by May and Taylor after holding open auditions online. The Idol performance will be a warm up for their national tour which kicks off in May when the four different vocalists will perform and show never-before seen Queen footage complementing the live performance. On the Idol stage, Queen Extravaganza will be performing, “Somebody To Love”.

This weekend, the Top Six were at the TMZ offices to get some advice about the perils of dealing with the paparazzi.  And TMZ should know all about that – LOL. The kids’ trip will also air on Idol this week. Most of the kids looked really shy in the interview, but I’m reminded of Carrie Underwood who everyone said had a great voice but no star power.

Come back on Wednesday, April 25th to see the full Idol recap and live videos right here on CDL. Then on Thursday, April 26th catch the live results show to find out which Top Six finalist is sent home.  Remember – on CDL we know our music and we love our Idols!