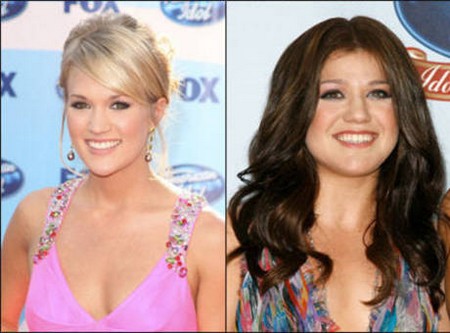 American Idol has been running for eleven seasons. It has dominated the television, music and radio industry. It has changed the way we watch music shows, how we choose our favourite music artists and how we control the destinies of future chart toppers. There have been eleven winners in the history of the show and Celeb Dirty Laundry is doing some investigation into which winner is truly the American Idol All Star.

First up we have Kelly Clarkson, the first ever winner of the show, who became a Grammy award winning superstar with multi-platinum single and album sales. Kelly has been taking over the world for the past eleven seasons of American Idol, with no other winner truly able to trump her in sales and worldwide appeal. She currently holds the second spot for the most post AI sales.

Ruben Studdard, the disappointing giant, was the second ever winner. His first two albums were the only ones which truly made an impact. In December of 2007 he was dropped by his record label, J Records, but he still remains signed to Team 19. American Idol was still in her infancy phase with the second season, but brought in the viewership by the record breaking millions. He currently holds the 6th spot in post AI sales. The crazed hysterical Fantasia Barrino came third and somewhat lived up to expectations with her first and second album reaching platinum and gold, respectively. She currently holds the 5th spot in post AI sales

Carrie Underwood’s win signaled a change in the American Idol future, with Carrie becoming the most successful Idol in the show’s history. Carrie’s first album, Some Hearts went platinum seven times and she’s garnered a smattering of awards in her short career. She currently holds the number 1 spot in post AI sales

Taylor Hicks stands out as one of the biggest failures in Idol history, with only his debut post-American Idol album reaching gold. He parted ways with the record company and ended up selling only 52 000 copies of his second, independent album. His compilation album, Early Works, sold no more than 4, 400 copies in the US. Jordin Sparks and David Cook followed up as the winners of season six and season seven, with their albums reaching average sales in the US, both currently standing in 10th and 7th spots, respectively, post Idol sales. Kris Allen and Lee Dewyze won season eight and nine, with Kris and Lee being two of the lowest post AI sales winners, ever. Scotty McCreery won season 10 and has achieved platinum status for his debut album. He holds the 12th spot in post AI sales. Philip Phillips being the latest winner broke records with the second biggest AI coronation single sales in Idol history.

Our vote is for Carrie Underwood and Kelly Clarkson. What do you think readers? Who should call it quits, Kris Allen and Lee Dewyze? Let us know in the comments who should be crowned as the American Idol All Star.