BY Danity Donnaly on May 31, 2012 | Comments: Leave Comments
Related : Celebrities 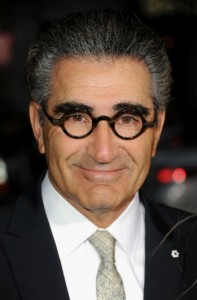 American Pie star Eugene Levy can officially be referred to as a doctor. Levy has received an honorary degree from a university in his native Canada. Congratulations Dr. Levy! He even wore a robe and collected his diploma to celebrate his Class of 2012 commencement ceremony in Nova Scotia.

Levy also stepped up to the podium to thank the university officials for the honor and he also encouraged new graduates to pursue their dreams.

He told those in attendance, “As a university drop-out and major academic disaster, I can’t tell you how excited I am today to be standing up here receiving an honorary doctorate from Dalhousie University…If there’s anything this university drop-out can say to the class of 2012, it is simply this: You only have one life to live and, as you will find out sooner than later, it goes by pretty quickly. Happiness should not be given short shrift. It should not be overlooked in your life’s to-do list – it’s just too damn important. And one way to make sure you can at least give yourself a shot at getting a little piece of it is to follow your heart…You graduates are at the starting line of what will be a most exhilarating journey. Don’t forget to take some time to enjoy it.”

No word on what exactly he plans to do with his degree but we are thinking he may be simply in it for the accomplishment. But, who knows?

You can check out Eugene Levy’s graduation speech here.