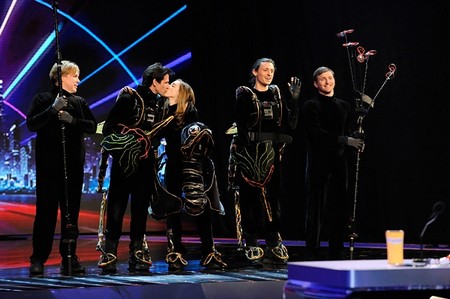 Tonight on NBC it is an all new episode of America’s Got Talent and we are at the half way point of the quarterfinals. On tonight’s show it is the Elimination night. Twelve acts hit the stage last night, but only four will move on tonight. Did you watch last night’s show? We did and we recapped it here for you!

On last night’s show there we many low points and very few high points.  Howard Stern suggested it was all about the nerves last night and a lot of performers let the nerves get to them.

Whatever the reason the performances were not memorable last night.  My pics to go ahead – 1. Light Wire Theater (see photo above), 2. Jacob Williams, 3. Wordspit and The Illest and  4. All Wheel Sports.  What were your favorite performances of the evening?  Hit the comments and let us know!

Ashleigh and Pudsey — the most recent winners of “Britain’s Got Talent” — and DJ sensation Havana Brown will be the featured guest performers on Wednesday night’s live results episode of AMERICA’S GOT TALENT.

Tonight’s show:  After tonight’s show four acts will be left.  Howie claims he was verbal last night because a lot of his acts went up and a lot of them made bad choices.

First up to stay or go!

Sharon comments that is was a difficult night and everyone suffered nerves.

America has voted and the act moving to the SEMI-FINALS is JACOB WILLIAMS – Howard says America got it right, Jacob did not crack under pressure.  He tells Jacob they are potentially looking at a $1 million act.

A lot of filler happens i.e. what happens backstage before the show etc etc etc.  This really should be a 1/2 hour show tops.

Then we get treated to a performance by Britain’s got talent Ashleigh and and her dog Pudsey.

All Beef Pattie, Inspire the Fire and Light Wire Theatre are up next.

Howie things they are all diverse groups and this is what America’s Got Talent is all about.  Howie says AGT is the Olympics of talent.

GOING TO THE SEMI-FINALS IS LIGHT WIRE THEATRE!   Sharon is over joyed because they stood up above everyone else.  She felt they ruled the night.

Howard says he does not know who is going home – but he feels all three are very talented and they should all be proud of themselves.

GOING TO THE SEMI-FINALS IS THE UNTOUCHABLES!

Howie tells them they are much more than a bunch of kids, he thinks they are far more polished than adults and they deserve to go on.

Spencer Horsman, Wordspit and the Illest and All Wheel Sports

The judges will decided who takes the last spot between two groups.  America has voted and the act going home is Spencer Horsman.

So the judges need to choose between All Wheel Sports and Wordspit and Illest.

HOWARD – says it is a very difficult decision, he loves both of them.  He votes for Wordspit and the Illest.

HOWIE – He compliments All Wheel Sports and tells them they were fantastic last night.  He thinks Wordspit is his favorite group on the show.  He loved the original song but he thinks they need to learn to play the game.  He votes for ALL WHEEL SPORTS

SHARON – the decision is hers tonight, she hates to be put in this position.  She thinks both acts are talented.  She chooses ALL WHEEL SPORTS!

ALL WHEEL SPORTS goes to the SEMI-FINALS!