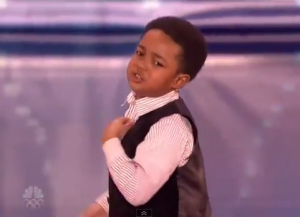 There will never, ever be another Michael Jackson but America’s Got Talent contestant Isaac Brown is starting off on the right foot. The 6-year-old Michael Jackson audition in St. Louis really captured the hearts of the audience AND the judges. Oh, he was adorable!

The little cutie patootie performed the Jackson 5’s “I Want You Back” and had the audience cheering. Not only does the kid have a good voice but he has what the judges were calling “star power” and a mega-watt personality.

Here’s what the judges had to say about little Isaac:

Howie Stern gushed, “I love you already and I just met you.”

Sharon Osbourne was thoroughly impressed saying, “Very few people have star quality — and you have it.”

That is huge! Brown got big fat yes’s from all judges and moves on to the next round in Vegas. So does this kid have what it takes to win the AGT title? Maybe, maybe not. Either way, his name is out there and you know there are scouts that have their eyes on this little guy.

Check out Isaac Brown’s America’s Got Talent audition below and then let us know what you think in the comment section below.

America’s Got Talent airs on NBC Mondays at 8/7c and Tuesdays at 9/8c.