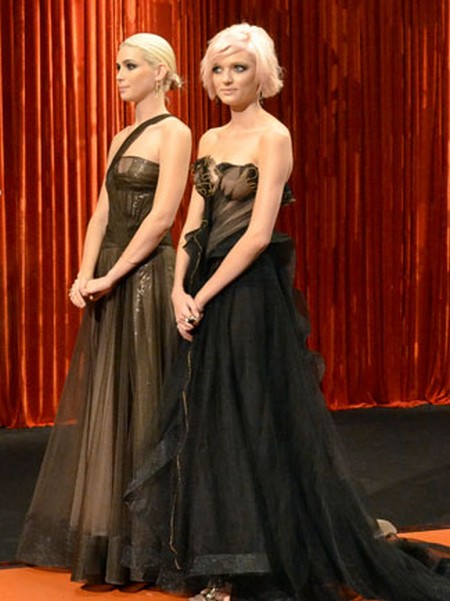 I am looking forward to the finale this evening of one of my favorite shows which is America’s Next Top Model.  It airs tonight on the CW at 9PM and tonight’s episode is the season finale and it will be showdown between British model Sophie and American model Laura. Standby by as we live blog the episode with all the up-to-the-minute details.

On last week’s episode the girls had to do a photoshoot for America’s Next Top Model’s ‘Dream Come True’ fragrance. Annaliese, 24, from London, England had a lot of trouble with the photoshoot, they had to shoot over 200 frames.  At the end of the show Annaliese was sent home because the judges felt she was not ready.  If you missed the episode you can read our full and detailed recap here!

On tonight’s show a winner is chose – The final models Sophie Sumner from the UK and Laura LaFrate from the USA participate in their Covergirl commercial and photo shoot, where one of the women has a panic attack and is taken to the hospital. For the first time in “Top Model” history, the women will take part in a holographic runway show interacting with lifelike images and also walk in sync with the outline of their own bodies. Kelly Cutrone and Nigel Barker join Jay Manuel and Tyra Banks on the judges’ panel to choose the winner.

I have been rooting for Sophie all season as she wows week after week.  Who are you rooting for tonight?  Hit the comments and let us know!

RECAP: After eleven weeks of tough competition, it is up to Sophie, the Oxford lady or Laura, the wild and crazy pirate. Laura is thrilled that she has the stronger walk, but Sophie has the stronger look. The two girls do a victory lap and congratulate each other. TYRAmail, “Tomorrow is going to be a blast!”.

The next morning, the girls go to see Jay Manual and he announces that the shoot is for CoverGirl Blast. Jez Smith will be filming the shoot today, the girls have to head to hair and makeup where they are going to find their scripts. Sophie is doing well, she nails the script. Laura looks amazing but she is acting self conscious and nervous. Jay gets her to work and relax at the same time so she can get through it.

Laura is shaking, her vision starts to blur and she is rushed to the hospital. In the meantime, Sophie has to go for her shoot and put it out of her mind. In the end, Laura had a panic attack, but she is fine now.

Time for more TYRAmail and the girls go to their next photo shoot, it is for Vogue Italia, it’s a spa look. Laura does a very good job, she really shone and the competition appears to be neck and neck at this point.

The girls are now back at the villa with Jay, the are filming their shoot. Jay wonders if Laura can handle the pressure of being in the business, he thinks she will be fine.

More TyraMail,”time to show the real you”. It’s time for the catwalk and the girls are prepared.

The girls are surprised that Tyra goes to see them before the catwalk. Laura talks candidly with her and tells her that she is not ready to stop. Tyra realizes that Laura was hiding behind the pirate, but is so proud that she is stronger now.

Tyra is now with Sophie and asks her what she thinks her chances are of winning the American show. Sophie tells her that she still thinks she can win and Tyra agrees, because she lights up the room.

The girls meet with Jay and he tells them that they will be doing a holographic fashion show for the first time and timing is key. Catherine, Eboni, Alisha and Annaliese are back and will also be in the show. The girls are all wearing Forever 21. The girls look fabulous and are ready to get on the runway.

Sophie was good, but there is no mistaking that Laura won this round.

The final two, Sophie and Luara are in front of the judges for the final time. Tyra goes over all the prizes again. Tyra starts with Laura – she felt she commanded the stage, but didn’t like the smirk. Now, Tyra loved Sophie’s body language, Jay loved her confidence.

Now the commercial, Nigel loved Laura, Tyra found she was too nervous. Jay reminds Laura that she had a panic attack and gets her to share it with the other judges.

Sophie’s commercial gets some positive criticism for being quirky, but Tyra felt that something was missing.
In the print ads, Tyra thinks Laura did a good job and the rest of the judges agree. Sophie gets great feedback, they think she looked like a superstar.

This is tough, a little negative and a lot positive for both girls.

Jay is surprised that at the end, he really likes both of the contestants. All the judges have their favourites, they just aren’t on the same page. Nigel loves that Laura will do anything it takes to get the photograph. Jay loves Laura, Nigel loves Sophie. Tyra brings up the panic attack, but Jay reminds her that there are many people in the business has them. There’s a big decision ahead for Tyra.

The judges have deliberated and have made their decision, the winner of America’s Next Top Model 2012 is….