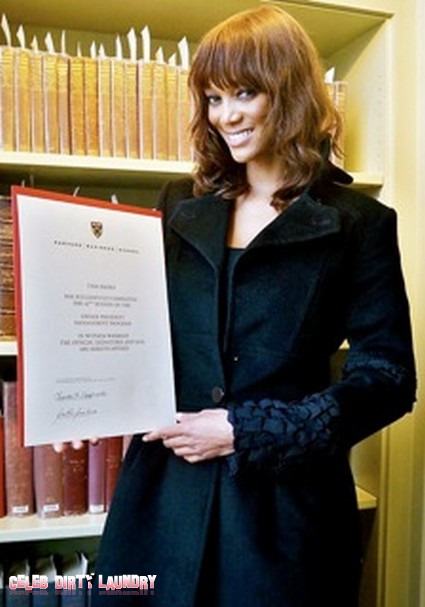 It’s true! Not only is she richer, prettier, and more popular than us, Tyra Banks is also more educated too! The America’s Next Top Model’s creator and judge graduated from Harvard business school Friday with a certificate from the Owner/President Management Program at the prestigious Massachusetts University.

“On stage at my Harvard Business School graduation! Lil blurry but SUCH an exciting moment 4 me & wanted 2 share w/u!,” Banks tweeted today, posting a picture of her crossing the stage in a black a-line dress and very high heels.

The 38-year-old owner of Bankable Enterprises enrolled at the Ivy League school in 2011 to improve her business skills with Bankable Enterprises. “In order for my company to grow and be the best, and to reach these women, and to serve them, I needed the best,” Banks told CBS last year.

The model admits that many people were shocked to find out she was pursuing higher education, partially due to the stereotypes associated with her career. “When people have low expectations, you’re just constantly going, ‘Ta-da!’ And they’re like ‘Wow! It doesn’t take a lot to wow them,” she told Us Weekly.

Banks was accepted to both UCLA and USC as a high school Senior, but chose to go to Loyola Marymount University. She dropped out shortly after enrolling to pursue modeling in Paris.

But with Cycle 18 of Top Model right around the corner, a book, and a bustling company to run, how was it possible for Banks to complete a degree at one of the top schools in the US? Apparently, the program is designed for working business owners and only requires students to attend 3 weeks per year. However, those three weeks set them back about $31, 000. “It’s pretty exclusive. It’s quite expensive,” Banks explained. “But, I feel like it is worth it. I feel like it is so, so worth it.” ‘Course, when your net worth is upwards of $90 million, $31,000 is like a bad day at Neiman Marcus!

It seems Banks had school on the brain as she has begun casting for Cycle 19 of “America’s Next Top Model today. The Cycle is subtitled “College Edition” and the  Top Model team will be casting girls from post-secondary schools. “Casting directors are looking everywhere from Ivy League campuses to party schools, from pre-med to pre-beautician, and from Big Ten to Pac Ten for girls from all walks of life, all parts of the nation, and all types of continuing education,” said a press release from the CW Network. The winner will get a modeling contract and the money to complete their degree. Cycle 19 is set to premiere in the Fall.