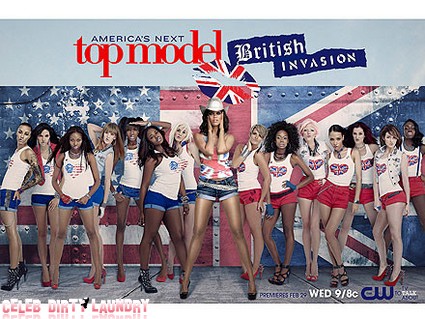 Cycle 18 of America’s Next Top Model is just around the corner and some new American hopefuls are in for a surprise when they battle it out against all-star models from Britain’s Next Top Model. The show debuts on “Leap Day”, February 29th on CW for a 60 minute show beginning at 9pm ET.  Emotions will run high and the competition will be intense as all the hopefuls, vie for the grand prize

Official synopsis: The 18th season begins with seven American models competing against seven British hopefuls who were previously featured on “Britain’s Next Top Model.”  At the first photo shoot, the ladies pose as famous British and American public figures. Kelly Osbourne is a guest judge.

The grand prize will be a little different this cycle, the winner should be a skilled host, singer, spokesperson and a model. The winner will receive a modeling contract with LA/NY Models, a chance to be a guest correspondent on Extra, a fashion spread in Vogue Italia and the cover and spread in Beauty In Vogue, the face of ANTM’s perfume “Dream Come True,” a single to be released with CBS and a $100,000 contract with CoverGirl cosmetics.

Being that the concept is British vs. American models, if the winner is British, will she still be America’t Next Top Model? We got some scoop on the Brit All-Star models, ya know, whose a bitch and all that stuff:

Here are the BRITISH MODELS:

Name: Annaliese [Dayes, of cycle 5]
Age: 24
Hometown: London, England
Height: 5’7
Hobbies: Trampoline, gymnastics and dance
Favorite musician: Drake
Favorite model: Eva Marcille
Seventh during Cycle 5, got eliminated for acting disgustingly and acting like a know-it-all. Was it during her shoot for Imodium? or her fight with a fellow model?

Name: Catherine [Thomas, of cycle 4]
Age: 22
Hometown: Folkestone, England
Height: 5’9
Favorite movie: Terminator 2
Favorite musician: Marilyn Manson
Favorite model: Milla Jovovich
Runner-up during Cycle 4 and got involved in some pranks against some of the other girls.

Name: Ashley [Brown of cycle 5]
Age: 22
Hometown: Armadale, Scotland
Height: 5’8
Hobbies: Tae kwon do and kickboxing
Favorite musician: Rihanna and Beyonce
Favorite model: Tyra Banks and Kate Moss
Fourth during Cycle 5, she has two children and certainly did not lead a good example when she showed up drunk to a photo shoot and shockingly did not get eliminated for this.

Name: Alisha [White, of cycle 6]
Age: 20
Hometown: South London, England
Favorite movie: Roots
Favorite musician: Rihanna & Mavado
Favorite model: Jessica White
Runner-up during Cycle 6 and in her Cycle the winner was chosen by fans rather than by the judges.

Here are the AMERICAN MODELS:

So, what do you think? Will you be watching the new cycle? I for one can’t wait and you come back to Celeb Dirty Laundry for all the spoilers, recaps and wrap-ups for cycle 18.