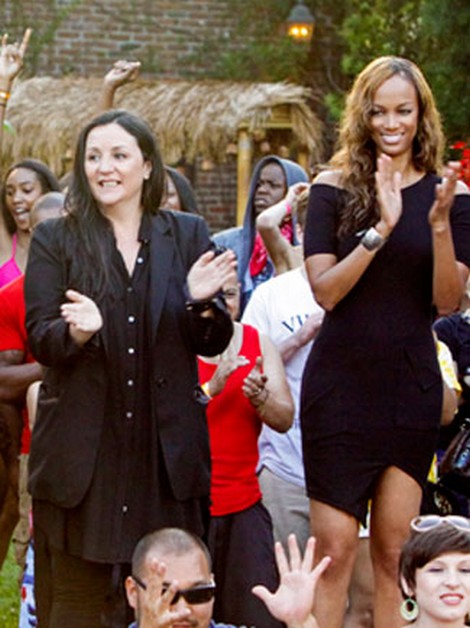 A new season of “America’s Next Top Model,” created and hosted by Tyra Banks, returns with new partners, new talent and a new judge tonight.  Can you believe we are already at Cycle 19 and this cycle will be the college edition.  Celeb Dirty Laundry will be covering the premiere of ANTM called ‘The Girl Who Makes The Grade’ tonight with all the up-to-the-minute happenings, so don’t forget to tune in for our recap.

This cycle the women will battle it out to earn the prestigious title of “America’s Next Top Model” and compete for a career-launching prize package that includes new partners Smashbox Cosmetics, Nine West and Nylon Magazine. The winner will receive prizes including: a fashion feature in Nylon Magazine, as well as $100,000 cash and campaigns with Nine West and Smashbox Cosmetics, in addition to a modeling contract with LA/NY Models and being named the face of ANTM perfume Dream Come True.

This cycle ANTM has added famed stylist Johnny Wujek as photo shoot creative consultant.  ANTM will also introduce its first-ever social media correspondent, top fashion blogger Bryanboy.  Bryanboy will use his extensive knowledge of both fashion and social media to mentor the models and highlight the scores, comments and video messages from the viewers that will be revealed in the show during judging.

In addition to the panel of judges, which includes Banks, fashion public relations maven Kelly Cutrone and new judge, former boxer and international male supermodel Rob Evans, fan voting will play a factor in who stays and who goes in the competition.

Tonight’s episode: Time for the 19th season and Tyra Banks has a whole new look for us and this time, the fans will have a voice in the judging room.  Tyra has scoured schools around the country, but first we get to meet the judges; returning judge Kelly Cutrone, supermodel Rob Evans and Katy Perry’s stylist Johnny Wujek.

Time for the competition to begin, the girls start by walking the runway over a pool to show what they’ve got and there is certainly a lot of confidence. The competition is on, the 30 girls head to a photo shoot and  give it all they got.

The moment has arrived, the girls will find out who will be entering the sorority house. Thirteen girls will have their names called out by Tyra, they are; Kristin, Nastasia, Laura, Allyssa, Destiny, Kiara, Leila, Darian, Maria, Jessie, Brittany, Yvonne and Victoria.

The girls run into the house and find a sporty girls room, a geek room and a pink room. Everyone is so excited and some are already thinking about the competition and know it is going to be fierce.

Next time on AMNTM, the claws come out for a lot of girls and poor Victoria who has been home schooled most of her life, has a bad case of seperation anxiety from her mother.