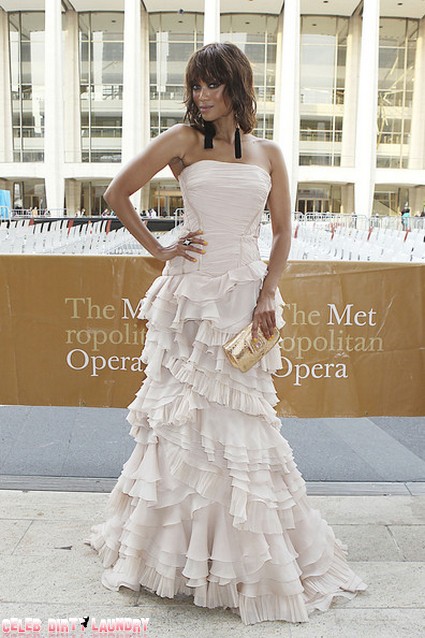 Tyra Banks has a new mystery boyfriend and nobody knows who he is – except for Tyra and the dude himelf. Leave it to TMZ or RadarOnline to ferret out the new man’s identity fast.

Tyra was a supermodel back in the day – now she is built more like a small mare – but her biggest claim to fame is as the creator and host of the popular reality show, ‘America’s Next Top Model.’

Tyra is said to be smitten with the mystery man after meeting him on a “spiritual break” in Bali, where she was recuperating after her split from long-term boyfriend John Utendahl. Tyra separated from Utendahl in December after three years together and decided to seek solace in the Far East with a female friend.

A source said: “Tyra has gone away with a female friend and has been island-hopping, visiting Bali and taking a spiritual retreat.”

A source spoke to People about her new relationship: “It’s a total long-distance romance. But it’s a big deal.”

Tyra met the new man on her trip to Bali last month and after flying home to New York, she turned right around and flew back to Bali to spend the Christmas holidays with him.

While we don’t yet know the identity of Tyra’s new man we can speculate as to several of his qualities: 1) he is wealthy or a he is a boytoy; 2) he is less famous than Tyra; 3) he is larger than Tyra; 4) We will know his name within a week.