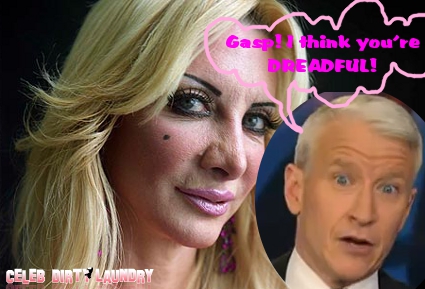 Anderson Cooper might just be one of the nicest, most polite talk show hosts out there . . . so when he kicks you off his show (almost immediately after you’ve taken your seat), you know something isn’t quite right. This is exactly what happened to Sarah Burge, the British mom who refers to herself as a “Human Barbie,” and who’s infamously known for injecting her seven-year-old child with Botox as well as giving her a boob job voucher for her birthday. Can you believe this nonsense?

Anderson’s talk show is no stranger to pop culture oddities, but this woman was apparently too much even for the The Coops to handle.

Halfway through the interview, after discussing everything from botox acquisition to the “professional” lifestyles of her four children, Anderson cooper said, “I honestly have nothing more to talk to you about” and asked her to leave. “I gotta be honest, I gotta just stop. I’m sorry,” he continued. The crazy barbie stormed off the set, all while muttering “that’s fine” with a pissed-off barbie attitude and a diva don’t-mess-with-me hand signal.

Later, on a backstage cam, Cooper reportedly said that he regretted having her on the show in the first place. Anderson is such a classy reporter. After this incident do you think he and the show’s producers will re-evaluate the talk show’s premise/main goal? Let us know what you think, and feel free to air out all your dirty laundry involving this dreadful mom.