Angelina Jolie and Brad Pitt Are Having Wedding Battles (Photo) 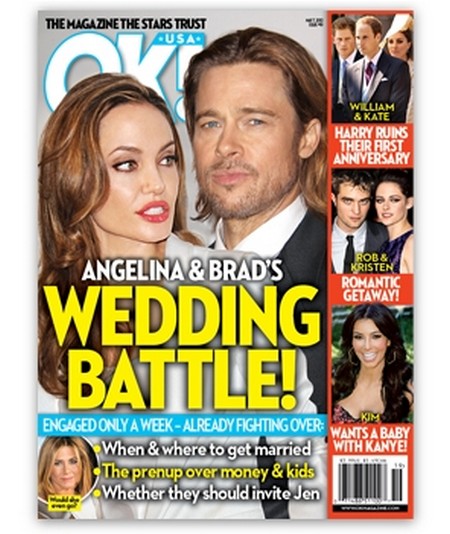 The current issue of OK! Magazine features the cover story ‘Angelina and Brad’s – Wedding Battle.’  The magazine claims that Angelina Jolie and Brad Pitt who announced their engagement last week are battling already.  Brad and Angie fighting over when and where to get married- rumor has it they are getting married in France.   The second thing they are fighting over is the prenup over their whopping fortune and their six children.  The biggest fight of all is whether they should invite Brad’s ex wife Jennifer Aniston.  I think it is highly unlikely they will be inviting Jen because of Angie’s unrelenting jealousy over Jen and Jen’s dislike of Angelina.

OK! has the scoop on the story: “You’d think them finally getting engaged would have them high on love, but since Brad’s proposal, the shine has worn off,” a close friend of the megastars tells OK!. “Of course that’s mainly down to them having to agree on the nitty-gritty details of the wedding, including the prenup, and they’re both quite horrified to discover there are loads of things they do not agree on.”

So there you have the story – what do you think will Angelina and Brad ever make it down the aisle or will the fighting derail all their marriage plans?  Hit the comments and let us know your thoughts!

When it comes to Reality Star Kim Kardashian rumors, it is hard to keep up with them!  This week’s issue claims that  Kim who is dating Kanye West wants to make Kanye a father.  Kim wants to have a baby with Kanye.  Kanye is rumored to be on Kim’s reality show – so imagine they incorporate her pregnancy into the show!    OK! also has the scoop on how Duchess Kate Middleton is furious over Prince William hanging out with little brother Prince Harry too much.

To find out all this and more pick up the current issue of OK! Magazine on stands now!