Angelina Jolie Is Just Like Us, She Takes The Bus 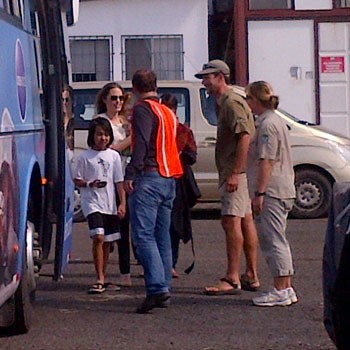 When in Rome, or in this case Ecuador, do as the Ecuadorians do, take the bus.  That’s exactly what Angelina Jolie decided to do, just hours after arriving in the country via private plane.  The newly engaged Jolie was seen boarding a bus with her children shortly after landing in Ecuador. According to Radar Online she and all six of her children (with Brad Pitt) were on their way to a vacation in the Galapagos Islands.

Jolie was all smiles while hiding behind her trademark sunglasses as she waited to board the bus with her kids.  Perhaps part of her joy was due to the huge engagement ring that fiancé, Brad Pitt, had designed especially for her. As Celeb Dirty Laundry reported earlier, the trip itself was to celebrate the couples’ engagement.  They brought children, Maddox, Pax, Zahara, Shiloh, Knox and Vivienne to make it a family affair.

Interesting how these outings always happen halfway across the world.  Wouldn’t it be something if Jolie opted to take the bus in NYC with all the kids in tow instead?  That would be great – in the USA she would not be protected from the paparazzi and we’d get to see even more of the new United Nations Special Envoy!

Brand new photos of the family pop up almost every day and the kids are rarely smiling.  Do you think Angelina Jolie and Brad Pitt should spend more time stateside with their brood?  Perhaps the constant traveling, uprooting of the kids and lack of a consistent schedule is catching up with all of them?  What are your thoughts?  Tell us what you think in the comments below!