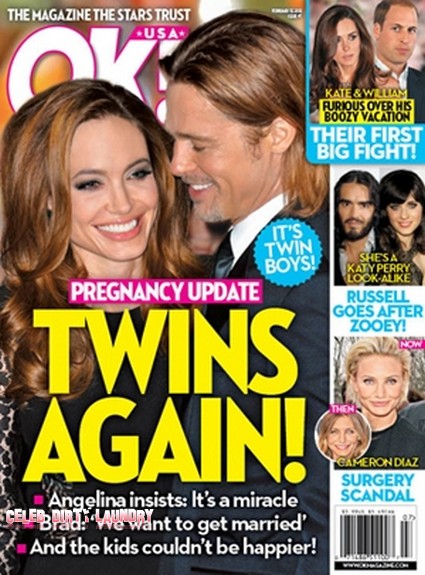 The current issue of OK! Magazine features the cover story this week ‘Pregnancy Update – Twins Again.’  The magazine claims that Angelina Jolie and Brad Pitt are pregnant again with twin boys.  This would make 8 children and the second set of twins for the couple who are already parents to Maddox, 10, Pax, 8, Zahara, 7, Shiloh, 5, and twins Knox and Vivienne, 3.

OK! has more: They were overjoyed at how quickly Angie became pregnant this time,” says a confidante. “They said that it showed that this pregnancy was ‘meant to be.’ But then Angie’s latest ultrasound revealed there were two heartbeats well they couldn’t believe it. They were totally shocked!”  “Angelina is absolutely thrilled,” says the confidante. “She and Brad can’t believe that they’ve been so blessed again. They are so excited that they are struggling to keep it a secret. But they are totally buzzing and have only spilled the good news to very close friends and family.”

If you saw the recent pictures of Angelina walking the red carpet at the Golden Globe Awards where she stole the show or the SAG awards you would know that this story is a complete fabrication by the magazine.   No baby bump showing at all!  What do you think is Angelina pregnant?

Also featured in this week’s issue the magazine claims that Duchess Kate Middleton freaks out when Prince William parties hard with brother Prince Harry. Russell Brand zeroes in on adorable Zooey Deschanel  who just happens to look like his ex, Katy Perry.

To find out all this and more, pick up the current issue of OK! Magazine which hits stands Thursday!