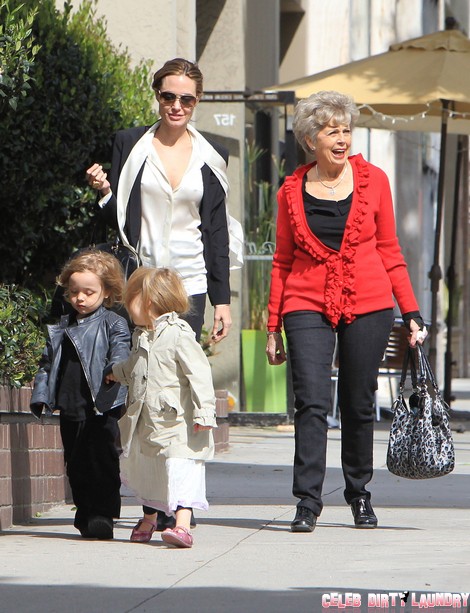 Don’t we hear about this every year?  The holidays roll around and when the time comes to make plans, Angelina Jolie has absolutely no intention of spending a hot minute in the Midwest with Brad Pitt’s parents. Jane Pitt, Brad’s mother loves to plan a holiday surrounded by all of her grandchildren but Angie would much rather spend this time of year spooning out slop in a war-torn country then sitting beside the fire opening presents with her fiance’s family.

According to the latest issue of The Star Magazine,

“As usual, Angie has no desire to spend her holidays in the Midwest, something Brad’s mom, Jane, finds rude and insulting. But Angie couldn’t care less. They have such different opinions on everything. Brad’s parents are extremely right-wing and religious. Angie has to bite her tongue to keep the peace.”

Jane Pitt has openly blamed Angie and lists her as the main reason why she rarely gets to see all of her grandchildren together. These women have been at odds since day one and it’s no secret that Jane was super close to Brad’s ex, Jennifer Aniston.  She must hate that her son left Jen for such a stand-offish woman that clearly doesn’t value the power of family values. Angie likes to add on children but with the way she uproots them and keeps them living a somewhat nomadic lifestyle is going to adversely affect them eventually.

Should Brad put his foot down and insist that he wants to spend Christmas at home in Missouri, with all of his kids present? Is it time for him to demand a bit more control over his life? I get the feeling Brad does exactly what Angie tells him too and he rarely bucks that established system. Tell us your thoughts in the comments below!