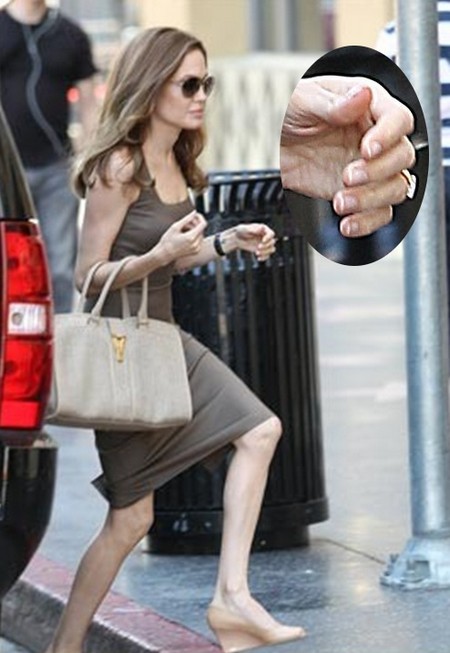 Angelina Jolie is the hottest engaged woman in the world right now having received an amazing rock from Brad Pitt.  Angelina was out and about and flashing leg and ring for all to see as took care of business in Hollywood today.  Everyone was both startled and delighted last week when the news broke that Bragelina would finally be heading to the alter.

The 36-year-old actress was first spotted wearing the ring on Wednesday when she attended a private viewing of the Los Angeles County Museum of Art’s Chinese Galleries with Brad and their son Pax.

Earlier this year, Brad hinted that wedding was a strong possibility when he told CBS news: “Getting married means something to the kids. We will someday, we will. It’s a great idea. ‘Get mommy a ring.’ ‘OK, I will, I will,’”

“We’d actually like to,” Brad said of making Jolie his wife, “and it seems to mean more and more to our kids. We made this declaration some time ago that we weren’t going to do it till everyone can. But I don’t think we’ll be able to hold out. It means so much to my kids, and they ask a lot. And it means something to me, too, to make that kind of commitment.”

At that time, Pitt declined to comment on whether he had proposed yet. “I’m not going to go any further,” he said, “But to be in love with someone and be raising a family with someone and want to make that commitment and not be able to is ludicrous, just ludicrous.”

Angelina sure is thin.  Do you think she looks well?  Let us know in the comments below.