Angelina Jolie Starving Herself As Her Hair Falls Out In Clumps 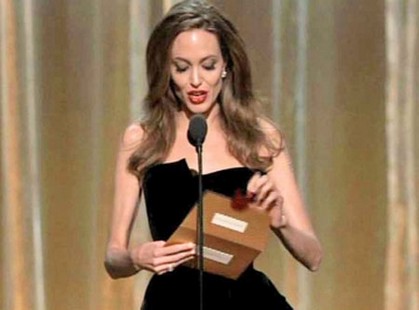 Angelina Jolie is up to her old anorexic tricks and that means starving herself.  This has fiancé Brad Pitt losing his own mind for fear that Angelina’s health is in jeopardy. Sources report that Angelina’s hair is falling out in clumps and that her famous engagement ring is now too big and is falling off her finger.

Angelina is allegedly very insecure if she does not look as skinny as rake and thus she is ignoring the increasing toll that her lack of nourishment places upon her health. Angelina wants to be ‘model thin’ for her starring role in Maleficent and Brad has been forced to give Angelina an ultimatum.  She must gain 10 pounds before the wedding or else… But headstrong Angelina has told Brad to forget about it.

Angelina now weighs less than 100 pounds at 5’ 7” and is determined to lose even more weight. A friend says: “She wants to show everyone that she’s the hottest A-list actress in Hollywood at any cost.”

The GLOBE Print Edition, May 7th tells the story:

Angelina reportedly wants to look her skinny best when she begins filming Maleficent, the title role in a sleeping beauty movie, in June. “She’s determined to stay slim for this movie,” says a source, “but the truth is she looks skeletal.”

Angelina let the world know that she and Brad were finally going to tie the knot when she sported a massive 16-karat white gold emerald-cut diamond sparkler while visiting L. A.’s museum of art with son Pax on April 11.

But the real shockers were the spindly delete legs and skeletal arms.

“Her engagement ring is already loose on her finger,” says a friend. “Brad gave it to her at Christmas and it’s fallen off on several occasions.”

“She’s lost at least another 5 pounds and Brad told her enough is enough.”

But the Benjamin Button actor’s pleas are falling on deaf ears, reveals the insider.

“She doesn’t eat any processed foods – nuts and organic vegetables are her main staple,” says the pal.

Friends say Brad, who has taken a year off from movie-making to organize the wedding and watch the kids is “desperately worried.”

“Brad’s noticed her hair is a lot thinner and clumps will fall out in his hands,” says a friend.

“She’s also tired all the time and he knows she can’t carry on like this for much longer.”

But Angie is determined to be stick-thin when filming starts in June. “She doesn’t see the problem,” adds a friend. “She insists she feels really fine and that she gets a real confidence boost knowing she’s model-thin.”

Angelina is obsessed with her appearance as are most Hollywood stars.  They will go to any ends to try to look the way they think they should.  Steroids, cosmetic surgery, starvation, whatever it takes.  After all it is all about appearance in Hollywood and for most celebs when their looks are gone, then so are their careers.  A pathetic state of affairs and it is us, the fans, who are to blame.  If we made our entertainment consumption choices based primarily upon talent and not primarily upon looks then so would the producer – they would have no choice! Imagine if professional sports teams selected their squads based upon the appearance of the players not their skill?