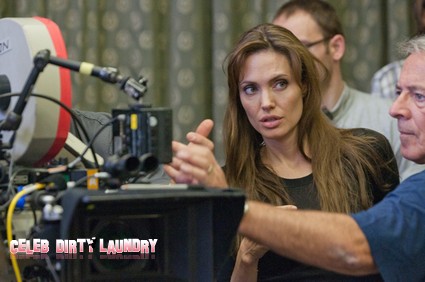 Angelina Jolie made her directorial debut with the recently released film “In the Land of Blood & Honey” and she will be hosting a live on-line video chat – and you can see it right here at celebdirtylaundry.com Thursday, January 12th at 8pm EST/5pm PST.

The 45-minute online chat, presented by Hearst Magazines in partnership with Angelina, will feature Hollywood’s top female star focusing on her experience as a first-time director with interactive questions from viewers.

Angelina had this to say about the upcoming chat: “This is my first online chat and I’m thrilled that Hearst is broadcasting this across so many of it’s websites to reach such a diverse audience as the film expands into more theaters.”

You are welcome to watch the chat on Celeb Dirty Laundry and to actually participate in the conversation you must have your own Facebook account.

Not only are you getting to see the chat at Celeb Dirty Laundry but we are giving away an “In the Land of Blood & Honey” poster – to enter simply post a question for Angelina to answer in the comments section below.

Below is a precis of the move:

In the Land of Blood and Honey has been nominated for a Golden Globe® for Best Foreign Language Film. Set against the backdrop of the Bosnian War that tore the Balkan region apart in the 1990s, the film tells the story of Danijel (Goran Kosti?) and Ajla (pronounced Ayla) (Zana Marjanovi?), two Bosnians from different sides of a brutal ethnic conflict. Danijel, a Bosnian Serb police officer, and Ajla, a Bosnian Muslim artist, are together before the war, but their relationship is changed as violence engulfs the country. Months later, Danijel is serving under his father, General Nebojsa Vukojevich (Rade Šerbedžija), as an officer in the Bosnian Serb Army. He and Ajla come face to face again when she is taken from the apartment she shares with her sister, Lejla (Vanesa Glodjo), and Lejla’s infant child by troops under Danijel’s command. As the conflict takes hold of their lives, their relationship changes, their motives and connection to one another become ambiguous and their allegiances grow uncertain. In the Land of Blood and Honey portrays the incredible emotional, moral and physical toll that the war takes on individuals as well as the consequences that stem from the lack of political will to intervene in a society stricken with conflict.