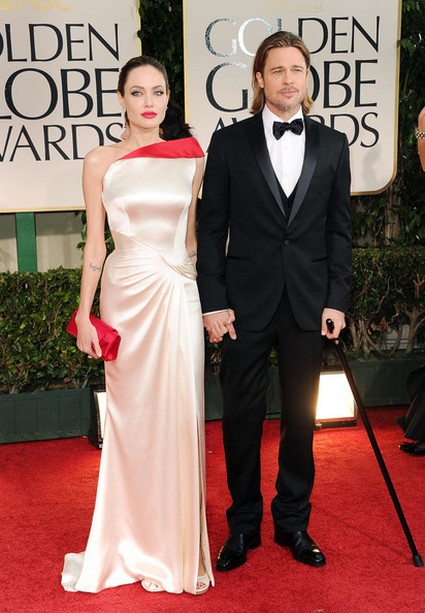 Sources reveal that Angelina Jolie has a new enemy in George Clooney’s girlfriend, Stacey Keibler.  It seems that Stacey expressed her desire for Brad Pitt and that was enough to make Angelina an enemy for life! Stacey is basically a Hollywood hanger-on who’s main claim to fame is bedding Clooney. She is a former professional wrestling diva with long legs (42 inches) and a “Dancing with the Stars” contestant who has seen her value shoot up since snagging the much older Clooney – how much more would her value increase if she could steal Brad Pitt from Angelina?

The Nartional Enquirer’s sources say:  “Angelina is quick to judge, and she decided early on she wanted no part of this woman,” said a source. “It makes things uncomfortable for Brad and George since they are best friends.  According to another insider, Stacy, raised Angie’s ire early on in her five-month romance with George when she gushed about Brad on Twitter, posting: “Brad Pitt wouldn’t be bad to look at every day!”

Said the insider: “From then on, Angelina’s been de­riding Stacy. She doesn’t like any woman even joking about wanting Brad, especially one who actually has access to him. She sees this girl as nothing more than a former cheerleader and pro wrestler and tells Brad, ‘George can do better than that!’ “She’s been ada­mantly opposed to the two couples going out together, even though George and Brad hang out a lot.”

Angelina stole Brad from Jennifer Aniston and everyone knows it. It makes sense that a thief fears that others have similar motives and this why Angelina is so jealous and fearful that Stacey could make a move on her man.