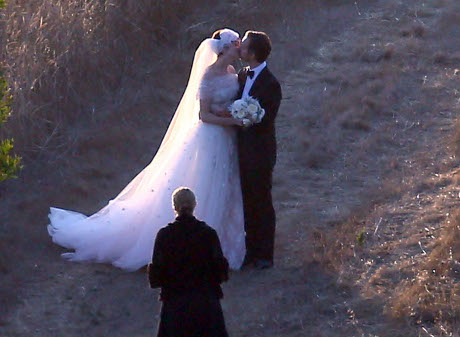 Anne Hathaway, the actress who was recently seen getting catty in The Dark Knight Rises, tied the knot with hubby Adam Shulman yesterday in an intimate wedding ceremony. The ceremony was held at a private residence in Big Sur, California and more than 100 guests showed up to support the couple on their big day. Anne was seen sparkling in an off-the-shoulder Valentino gown and her hubby didn’t look half-bad himself in a fancy tux with a bow-tie.

Apparently, Anne is very good friends with designer Valentino. When asked by E! News if the two were close, the designer said, “She’s a very good friend of mine [….] She’s like my daughter!” What a deal! I hope he gave you a very pretty bargain, girl, because I’m pretty sure that dress didn’t come cheap. But, then again, I’m no wedding expert either.

The wedding extravaganza reportedly began on Friday where the wedding party underwent one of those nerve wracking rehearsal dinners at the Ventana Inn and Spa. The wedding occurred on a luxurious estate nearby and, as reported by People, the wedding decor drew heavy inspiration from nature. “The wedding décor was inspired by nature, with many branches used to create a ceremony and reception to blend in with the majestic Big Sur surroundings,” a source tells the magazine.

“I am very much in love with him, [only] Adam totally ruined my plan,” the star of  the upcoming Les Misérables said last year. “I was really actually looking forward to a little alone time, and then I fell in love like a fool!” Looks like he really did spoil your plans! The couple met four years ago, and they’ve been together ever since.

Best of luck to you both! Don’t forget to check out the Anne Hathaway wedding photos! We have them for you below. Just click on a pic and start cycling through the gallery. Let us know what you think of the dress and the entire ceremony.