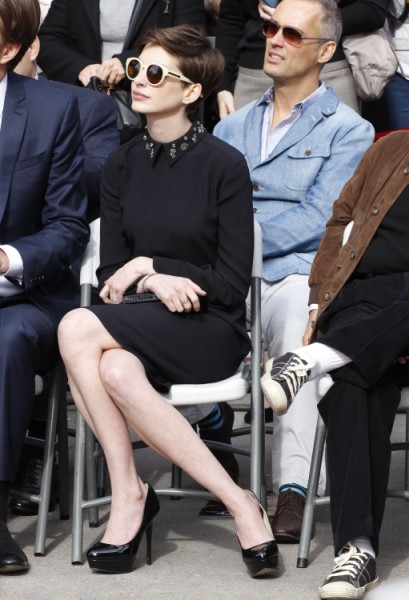 Anne Hathaway would worry about something like that, wouldn’t she? Perfect, pixie-cut, pretty pretty Princess Diaries Anne Hathaway would think a little crotch shot would ruin her chances of Oscar gold. Just between you and me, she should be more worried about her fashion choices and not her lack of underwear. Her fug on the red carpet is out of control. But I digress.

A source told Hollywoodlife, “She’s been fighting all of her life to be seen as a ‘serious’ actress, and this could make older stars see her as just another Hollywood ‘pop tart’, like Lindsay Lohan. Anne is really hoping for an Oscar for Les Misérables, and she’s worried that this misstep will hurt her credibility as an actress. The nudity doesn’t bother her — she’s been naked on camera before — but this musical has meant so much to her and her family [her mother acted in it]. She would hate for such a misstep to derail her in the eyes of Academy voters. In all, it would be a shame if this is true, because she’s brilliant in the role.”

First of all, HL is notorious for writing shit but I want to believe this because it’s so Anne Hathaway. Crotch flashes are not for Oscar winning ladies like Grace Kelly and Reese Witherspoon. She apologized for it so you’d think she’d be over but this is an Oscar campaign, and as we’ve said before, Anne is campaigning HARD. Save for Ben Affleck I’d say Anne is campaigning the hardest but her over-eagerness might be costing her because she’s getting tripped up. Yes, the crotch shot did hurt her because, instead of talking about Les Miserables and her career on The Today Show, she brought up the flashing. That’s one misstep of self-promotion though I’m pretty sure Kim Kardashian would disagree.

Next we have the Katie Holmes diss. When Anne hosted SNL a few weeks back she took some shots at Claire Danes and Katie Holmes. This was the second time Katie was the butt of her SNL jokes. I thought nothing of it at first but Anne must be nervous because she’s covering her tracks. She was just on Ellen and kissed Katie’s ass the entire time. She told Ellen: “What I really wanted to have happen, because this is the second time I did Katie… I wanted Katie to come on the show and do me and I like wanted to do this rap about how awesome I think Katie Holmes is. But she is on Broadway and killing it on Broadway so she couldn’t… she was busy.”

Is Anne nervous she’s become the publicity wh-re meangirl of the Oscar season? I definitely sense she’s trying to cool it. You don’t have an amazing year like she’s had and then start ripping on your peers – especially Katie Holmes – the comeback, golden girl of Hollywood. It’s just not done and could look a tad overconfident.

But I don’t think Anne has to worry about the flashing or the ripping on Katie Holmes too much. Anne Hathaway’s performance in Les Miserables is supposed to be remarkable. She just needs to take a couple breaths and tone it the hell down. Her missteps may have cost her a few votes but they won’t cost her everything.

By her recent statements, is Anne Hathaway worried her actions may cost her the ultimate prize? Did you know the process was so political? I was pretty upset when I first found out. Naive me, I actually thought this stuff was based on performance!