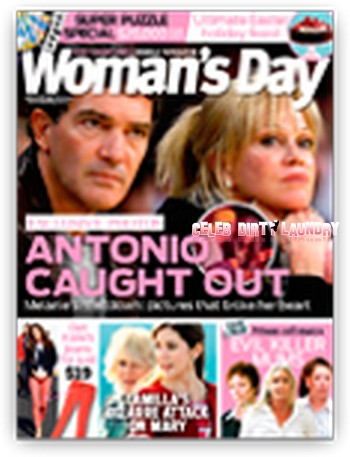 Antonio Banderas has been caught cheating on Melanie Griffith, his wife of 15 years and the evidence is on video!  Antonio picked up a hot young blond in a Cancun bar, Congo Bongo, and the two went off to a dark corner for some heavy duty kissing.

After heavy making out in the club Antonio escorted the hot blond out and they left together…  Sources describe the scene as one that would destroy Melanie.

Melanie is freaking out and is in a state of collapse over this shocking blow.  Melanie was at home looking after the couple’s daughter Stella during this nightmare.  Her response has been ““BoyfriEND, girlfriEND, friEND, everything has an end, except for family.”

From Australian Woman’s Day April 2nd Print Edition: After 15 years of marriage, Melanie’s been left reeling by shocking pictures of her husband kissing another woman.

As Latin music pounded through the Cancun bar, Antonio Banderas, 51, tossed back yet another tequila and made eye contact with a hot young blonde. It wasn’t long before she agreed to dance with the Spanish superstar – and even less time before he followed her to a dark corner of the Congo Bongo nightclub. What happened next was enough to shake his already fragile wife Melanie Griffith to the core.

“They kissed more than once,” a witness tells Woman’s Day. “At 2am, Antonio and his beautiful blonde left together.” Another source adds, “There was so much chemistry that I wouldn’t like to say what might’ve happened next. He was acting like a single man. His wife would be heartbroken if she had seen him that night.”

Melanie, 54, was at home in LA looking after their daughter Stella. At the time of going to press, the actress had yet to officially respond to the damning photographs, but had tellingly re-posted another blogger’s quote, “BoyfriEND, girlfriEND, friEND, everything has an end, except for family.”

The pain of her rocky marriage had been showing well before this incident. As she stormed from the set of The Hot Flashes, quitting the film over what she described as “creative differences”, friends were more stunned by her frail, thin figure. A source says, “Antonio’s begged Melanie to eat more and take better care of herself.” It’s not the first time she’s reportedly been blindsided by allegations of her husband’s cheating in Mexico. Visiting the country in 2007 to promote Shrek The Third, Antonio was spotted at an intimate dinner with a mystery woman.

What an awful bum Antonio has turned out to be.  Can Melanie recover from this horrid turn of events?  What do you think?  Let us know in the comments below.