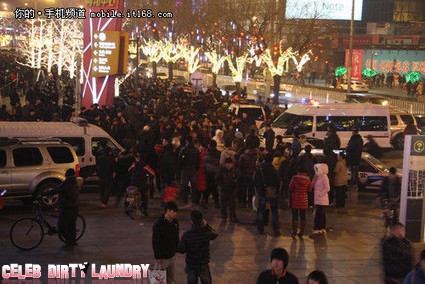 In Beijing shoppers threw eggs at an Apple store, people started fighting to the point where police even had to intervene. What was the horrible and dreadful event that caused all of this? The store would not be selling the iPhone 4S as they originally planned!

Even an announcer with a bull horn came out at 7:00am and told the shoppers that they were in fact not going to be selling the iPhone 4S, and that it would be smart if they just headed home. Many people actually waited there over night the day before just to buy these phones, so the crowd started getting angry about it and it just happened. People started to shove each other, which evolved into fighting and the police came and actually took some people away.

Now I understand that these people were out there waiting for this new phone for a long time, but to the point where they start hurting other people just because they couldn’t get what they want is incredibly pathetic. I don’t understand what makes people even think this is right, it’s just a phone. Hell, I haven’t even bought a new phone of my own since my last one broke and I manage without one.  It’s just a very embarrassing event, and I believe these people who took part in this fighting and such should just be ashamed of themselves.