April Baltierra Sells Out Her Own Daughter For Money 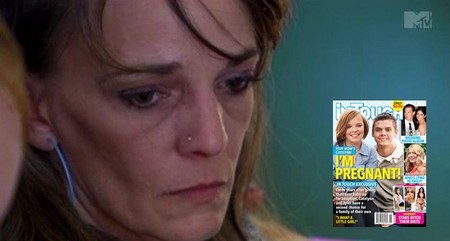 Remember when In Touch Weekly broke the story that Catelynn Lowell was pregnant again? It turns out, her own mother, April Baltierra, is the one who started the rumors. To make matters worse, in an interview with In Touch Weekly that came out yesterday, Catelynn Lowell said those rumors were a lie. “I want to set the record straight. I’m not pregnant,” says Catelynn. “My mom lied.”

Apparently, April even went so far as to pretend to be her daughter in a phone interview with the magazine, but stressed that the magazine not call her back because the stress from the phone call might cause her to “lose the baby.” According to In Touch Weekly, an independent voice analysis conducted by a private investigator reportedly revealed ‘with beyond a reasonable degree of professional certainty’ that the person whose voice on the phone claiming to be Catelynn was actually that of her mother. April also reportedly provided the magazine with forged documents from the doctor’s office to prove Catelynn was pregnant.

So why would April do this, you ask? “I think it’s because she has no money…” says Catelynn. “So she’s trying to sell her daughter.”

Things do not appear to be going well for April, who is reportedly homeless at the moment. Her husband, Darl Lynn Baltierra (who goes by the nickname ‘Butch’), who also appears on the show, is currently serving a two year sentence in jail for a parole violation.

Nonetheless, April continues to stand by her story and insists that her daughter was “fully aware” of it, whatever that means.