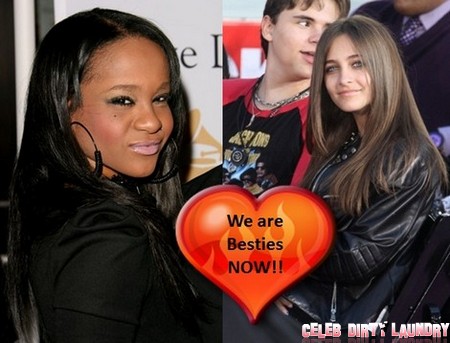 Well here’s a friendship made in heaven! According to the new reports, Michael Jackson’s daughter Paris Jackson is said to have gotten close with Bobbi Kristina, the late Whitney Houston’s daughter.

I can understand how the two teenagers would be bonding, considering both lost their famous parents at a young age. Paris has been dealing with the loss of her dad for a few years now, and is dealing with a whole plethora of other troubles concerning the rest of her family.  Bobbi – known as ‘Krissi’ to her friends, lost her mother just a short time ago and is already working on her own Lifetime reality show “The Houston Family Chronicles”.  If you’re thinking what I’m thinking and that it’s too soon, then we’re probably right.

Paris is an aspiring actress, and who knows where that will lead her.  As for how the two have become friends, apparently Bobbi Kristina reached out to Paris (I just can’t help myself) after watching TV reports of the headline-making Jackson family feud concerning Paris’ dads $500 million fortune.

“The two girls talked for hours and realized they had a lot in common,” a source told The ENQUIRER. “They both lost superstar parents at an early age, and their families are notorious for airing their dirty laundry in public.

“The girls now consider themselves friends, and Krissi has even invited Paris to be on her reality show. Paris said her Aunt Janet would hate it, but if she gets her grandmother Katherine’s permission, she’d love to do it.”

Now I’m never one to shun any new budding friendships, but does this seem like a really good idea? They both seem very fragile, and I doubt that being involved in a reality show is the best move for Paris – especially if she wants to be taken seriously as an actress. Then again, what the heck do I know?