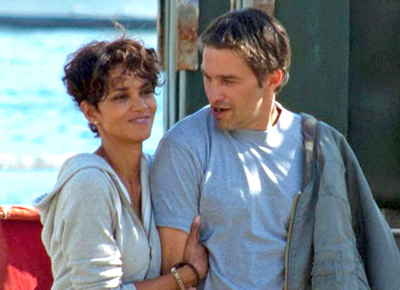 Halle Berry and Olivier Martinez‘s relationship has been going strong, ever since they first got together back in 2010. So strong that RadarOnline spied what suspiciously looks like an emerald engagement ring on her left hand!

Despite declaring that she would “never, never get married again,” Star Magazine reports that the 45-year-old actress and her French boyfriend may be planning a trip down the aisle.

“Halle has found her true soulmate in Olivier and it’s only a matter of time before they tie the knot,” said a source to the magazine. “She’s madly in love and knows she wants to spend the rest of her life with him. Olivier has been the rock that Halle has never had in any of her relationships.”

Halle has already been married twice before, a three-year marriage to baseball player David Justice that ended when she was 30 years old and an ensuing two-year marriage to singer Eric Benét.

And while there are some celebs we hope never marry for a third time (ahem, Kim Kardashian) we would love to see Halle’s 3-year-old daughter Nahla carrying a bouquet of flowers down the aisle at her mom’s wedding to Olivier Martinez!