Are Taylor Swift and Zac Efron Hooking Up? 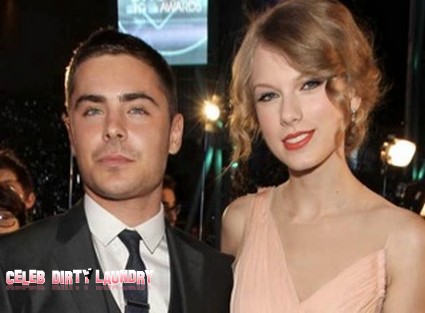 Taylor Swift just can’t seem to find love. She’s dated—and been dumped by—Jake Gyllenhaal, Joe Jonas, Taylor Lautner, and John Meyer. It’s gotten to the point where she is as well known for her famous breakups as she is for writing hit songs about them. Now, rumor has it that Swift may be trying to add Zac Efron to her list of exes.

According to Us Weekly, 22-year-old Swift and 24-year-old Efron were recently spotted flirting over Italian food at popular L.A. restaurant “Pace.” Fellow dinners said that the two “were deep in conversation and very giggly.” The young stars continued to fuel the rumor mill by getting close at the People’s Choice Awards last week.

Efron, who hasn’t dated much since Vanessa Hudgens put him back on the market in December 2010, has spoken highly of Swift calling her a “lovely girl, very beautiful,” while Swift has called him an “all-around amazing guy.”

As we reported in March, the young stars worked on “The Lorax,” a movie based on the popular Dr. Suess book. And as anyone who has listened to Swift’s lyrics would know, nothing get’s her hotter than rhyming couplets!

However, sources say that the romance rumors are totally made up and that the celebs are just hanging out to generate buzz for the upcoming movie release. Of the recent dinner, a source close to the stars told Us Weekly, “They were in L.A. doing press stuff together. After they were done, they decided to grab dinner.” But according to another insider, the attraction may just be one sided, “Taylor thinks Zac’s cute…[but] they are on totally different wavelengths.”

Swift recently told Vogue that her new album will be about an “earth-shattering, not recent, but absolute crash-and-burn heartbreak.” (So basically it will be just like her last album, and the album before that!) In the interview, the singer claimed that she is currently single and not interested in dating.

I’m thinking she’s willing to get interested for Zac…I mean…think of the song possibilities!