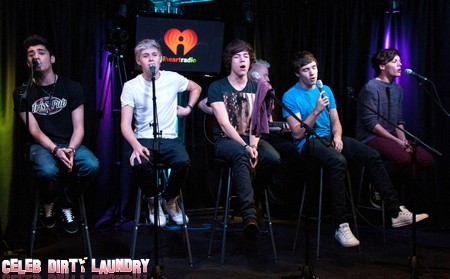 The British boy band One Direction needs an army to protect them from their rabid fans and that is bad news for Justin Bieber.  For their debut in Dallas Saturday the teen idols had close to 100 trained security staff watching their butts… and we don’t mean that literally.  The boys only played a 4-song gig lasting 45 minutes and yet required more security than the President!

These kids comprise the first band ever from the UK to debut at number one with their very first album!  Talk about the star-maker machinery… Simon Cowell is stoking those fires with everything he’s got.  Simon doesn’t want another ratings failure like he got with ‘The X Factor USA.’

Could these dudes eclipse Justin Bieber?  After all, there are more of them to love. Do you think that One Direction’s rise is a harbinger of Justin Bieber’s decline?  Can the teen market sustain two mega stars simultaneously – or will we be seeing Justin on DWTS soon…

TMZ has an exclusive report:  There are five members in the hit British boy band One Direction — and today in Dallas, there will be 20 security personnel for each of them … to ensure their rabid fan base stays safe and in check.

According to our sources, a security team of 100 has been assigned to protect the group for their performance … which is only supposed to last 45 minutes.   The band, which became the first UK group in history to debut at number one with their first album, is scheduled to play just four songs for a crowd of about 7,000 at the Dr Pepper Ballpark.

The security breaks down like this: 40 for close protection security, 50 more for the venue, and then 10 more just on stand by.

Do you think that One Direction’s rise is a harbinger of Justin Bieber’s decline?  Can the teen market sustain two mega stars simultaneously – or will we see Justin on DWTS soon…

What do you think?  Is it all over for Justin?  Let us know in the comments below.