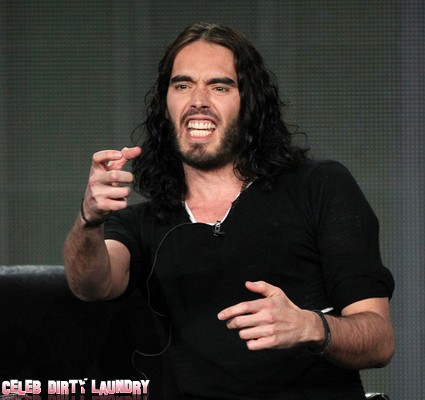 Russell Brand is a wanted man – literally. New Orleans Police have issued a warrant for his arrest. It’s not for crimes against fashion…(he should have been locked up for that years ago)…it’s for that run in with a paparazzo this week.

According to TMZ a misdemeanor warrant for criminal damage to property was issued last night. The former Mr Katy Perry is accused of grabbing a photographer’s iPhone on Mondaywhen he saw him using it to take pictures…and hurling it through the window of a local business. Apparently a rep for Russell Brand contacted the business – a law firm of all things! – and said the Arthur star was willing to pay for the damage but the warrant was still forthcoming.

It begs the question. Is Russell Brand losing it? He was such a well behaved English chap when married to Katy Perry. Now he’s gone back to his wild ways. Although a stoush with a snapper is nothing new. Ask Sean Penn, Britney Spears, Adam Lambert or Woody Harrelson. They’ve all been there.

Russell tried to joke his way out of the incident  – but obviously no-one was laughing. The funny man blamed Steve Jobs for his violent outburst. Yes …Steve Jobs! He made some lame-ass excuse that he was protecting the former Apple CEO’s  good name ‘Since Steve Jobs died I cannot bear to see anyone use an iphone irreverently, what I did was a tribute to his memory.’ That didn’t go down very well and here we are three days later with Russell facing big legal problems.