Arrow Season 1 Premiere Review: A Green Arrow Soars onto The CW and Lands a Bullseye!

BY Nicholas Sanford on October 11, 2012 | Comments: one comment
Related : Review, Television, THE CW 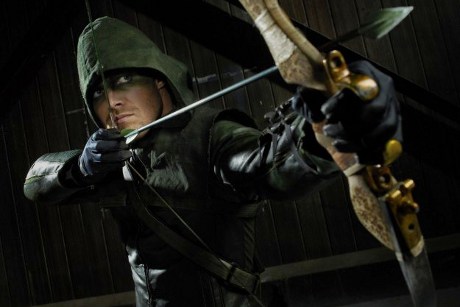 Last night marked the premiere episode of The CW‘s Arrow and, even if you’re not a fan of superhero shows, there’s definitely some fun to be had here. If you don’t mind the cliches and stereotypes that inevitably come along with a series such as this, then be sure to put your cape on and ready that smoldering vigilante stare for next week’s episode!

The show focuses on Oliver Queen (Stephen Amell), a once-spoiled celebrity brat who finds himself stranded on an island — where he’s forced to weather the elements for nearly five years. Castaway style. The show begins with his rescue and, soon, the world that’s slowly faded away over the years welcomes him home with open arms. But many things have changed since his disappearance, including his mother marrying his father’s business partner. He’s also haunted by the chilly memories of his terrifying time on the island — memories he can’t run away from. He comes back a changed man. Oh, and he also brings back some badass martial arts moves, impeccable bow skills, and a particular love for green hoodie-things.

It’s not long before he finds himself trying to apologize to a young, pretty lawyer named Laurel (Katie Cassidy), whose sister died on Ollie’s yacht that crashed five years ago. Laurel blames Ollie for her death. After a failed attempt at apologizing to Laurel, Ollie runs off with his friend and they are attacked by masked hoodlums. It’s during this moment when we see Ollie’s superhero bug kick in. Major kick-assery ensues, and it’s only a matter of time before he dons a mask.

He comes back to the world with intense motivation to clear the city of its dirt — and he’s got a spiffy checklist of names to help him keep track of all that scum. Ollie’s father, upon his last breaths, said that he didn’t “build this city, but failed it,” and makes Ollie promise that he’ll survive and purge the city of evil and darkness and of all the wrongs he’s committed and blah, blah, blah, blah. Same ol’ superhero-in-the-making talk. Next, Ollie finds an abandoned factory and establishes a secret lair. Duh. Readies his weapons. Duh. Puts on his angry Imma-get-all-the-baddies face. There’s a twenty second scene of him working out in the buff. And now . . . the vigilante is primed and ready.

He has a run in with one of the baddies on his list, who just so happens to be the guy Laurel is trying to lock up for good. After stealing $40 million dollars from the baddie and filling the bank accounts of the all of Laurel’s clients (wronged by the baddie) Ollie finally gets settled into his hero boots. But he might have some unsuspected villains gunning for him and the knowledge he’s carrying regarding his father’s less-than-savory business relationships. Mommy Queen might be glad to see her son’s return for other reasons, and we learn by the episode’s end that she was the one who ordered those hoodlums to *attempt* her son’s kidnapping.

Overall, Arrow was an enjoyable show with a solid premiere that promises a hopeful season filled with crime-fighting, angsty romance, and secrets. It nicely fills the comicbook-action-hero void left behind by Smallville’s departure, and fan’s of the young Clark Kent will definitely be able to find some solace in knowing that there’s a new hero on the loose . . . and his aim is spot on.

Catch ARROW on Wednesday nights on The CW at 8/9c. If you watched last night’s premiere, let us know what you thought below!