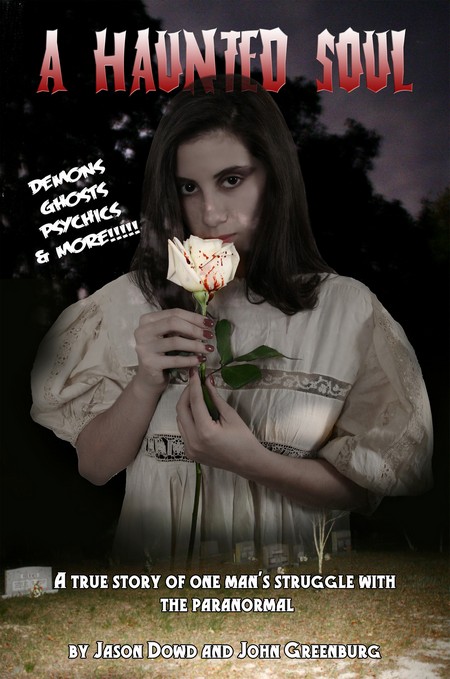 International Exhibiting Artist Jason Dowd breaks the silence of his tight kept secrets growing up in his new book “A Haunted Soul: A True Story of One Man’s Struggle with the Paranormal”.  Most of the incidents mentioned in this book led to his photographic art series “Dreams, Nightmares, Fears and Fantasy” Collection, which was displayed across the U.S. and Hong Kong, China.

He saw his first ghost, the legendary “Green Lady” of the “Seventh Day Baptist Cemetery” in his birth city of Burlington, CT back in 1987.  The incident threw doubt into the religion he grew up learning at his Lutheran School.  He also struggled with psychic like forecasts, something he didn’t understand, yet they managed to come true.  In 1993 a demonic entity in his home not only attacked him, but his friends, isolating them from him all together.  The paranormal world mixed with his psychic ability isolated him from the world.

After a near death experience, Dowd decided to break the silence and put into photographs the night he challenged the demon in the series “Demon vs. Angel” and his reoccurring dream “Trapped but not Dead” a dream he experienced since the age of 6.  These series along with other photographs from his famed art series made the book with the story behind them!

The book talks about his dreams and experiences nobody ever knew, including his family, because he was afraid to tell people what was going on.  It tells how the incidents isolated him from friends and family and caused severe hardships; yet he managed to overcome these obstacles.  It’s a story of triumph, and how art can heal your soul and mind.  It also exposes a side of Dowd that the world’s never known, including his twin sister who never made it into the world, passing away before the 2nd trimester.

Today, in addition to his art, Dowd enjoys paranormal investigating, helping people with his psychic ability and calming people while exposing them to the unknown with his art.

“I’ve seen and communicated with ghosts my whole life.  I’ve experienced some of the worst entities such as demons, and it turned my life upside down.  I stayed away from people because I didn’t want them to see what I did, yet I didn’t know they couldn’t.  What I thought was a curse, is actually a blessing.  My life experiences turned into an art series that has helped others who experienced incidents like mine, and my book can be used as inspiration for those who are still going through things like I did” says Dowd.

The book is currently for sale on his website and Amazon.com in both print and eBooks.  It contains two full series of his art and 2 individual pieces that illustrate an incident in the book.  You can learn more by visiting his official website.