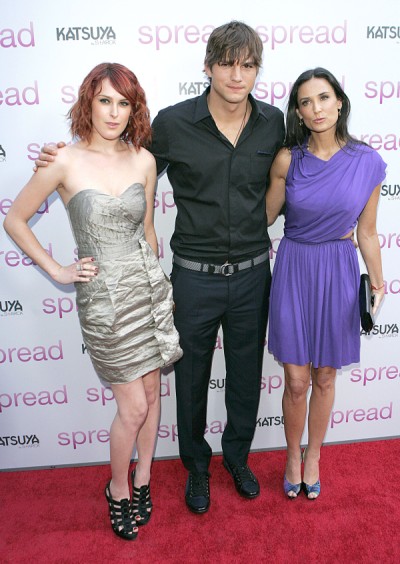 Rumer Willis and Ashton Kutcher are badly attempting to keep the secret that the two of them are still in a relationship. The Daily Mail reports Kutcher and his ex-stepdaughter were spotted in his car over the weekend and went to great lengths to remain hidden, a.k.a., they put their hands over their faces. The two separated and Kutcher went on to the Lakers game and Rumer headed to the Chateau Marmont. Now that the two are no longer family could they be considering making their relationship less platonic?

I’m guessing no and not because douche bag Kutcher has morals but because Bruce Willis would probably beat the crap out of him. And I think they’re shying away from the cameras because they don’t want anymore publicity than they’ve already received. Rumer is staying Switzerland in regards to her mom, Demi Moore, and her former husband. This isn’t the first time the two have hooked up since the split heard round the world. Just days after Demi returned from rehab, Kutcher went to the Sayers Club in Hollywood to watch Rumer sing. An onlooker told RadarOnline.com at the time, “Ashton came on his own and he was there from the beginning to the end. He provided a real cool, unassuming, supportive and stable presence for Rumer, who was obviously a little nervous.”

The duo also might have been shielding themselves because they didn’t want the pics to get back to Rumer’s sisters. The National Enquirer, April 2, 2012 print edition reported Scout and Tallulah Willis were livid over Rumer’s continued relationship with Kutcher and even called her a “traiter” resulting in even more tension in the house.

I  kind of have to side with the younger siblings on that one. I know they might have loved Kutcher but you got to have your mom’s back regardless. But I can see how this would be hard for Rumer. She’s obviously closer in age to Kutcher so he probably played less of a father than of a big brother role, especially since Rumer wants to be an actress. She probably looked up to him a lot as someone who’s dealing with the same Hollywood issues she is.

But he allegedly cheated on her mom! I don’t know if I would be able to wrap my head around that. Would you be able to forgive, forget and move on?