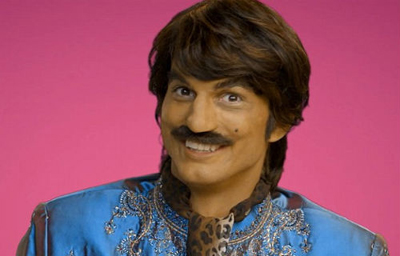 We love PopChips (they’re low-calorie potato chips, people!) but Ashton Kutcher‘s latest video promoting the brand that he is an investor in? Not so much.

The video promotion, which strangely does not feature PopChips’ logo or product anywhere in it, stars Ashton as an assortment of characters looking for love in a parody of a video dating service. One of those characters is a Bollywood producer for whom Ashton donned a brown face, bushy moustache, and an over-the-top Indian accent. Related: Are Ashton Kutcher And Mila Kunis Friends With Benefits?

According to Celebitchy.com, after people called out the character as being racist, PopChips has pulled the video off their website. Several celebrities have chimed in on the controversy as well:

“The problem with Ashton Kutcher’s ad is that his impressions were so lame and weak and that’s why it’s offensive!,” wrote Sharon Osbourne on her Twitter account.

“In light of the Ashton Kutcher PopChips scandal, I feel obliged to confess that in my AmEx spots I am also wearing brown face,” Tweeted Indian-American actor Aziz Ansari.

Tell us: Do you think Ashton’s PopChips video is racist?