If there’s anything that could really spoil your day, it would be an asteroid impacting our blue planet. The destruction and death will be on a global scale, and if humanity is able to survive, we’ll be down to the thousands. There is no escaping an impact event, nor is there place to hide. If an asteroid were to hit us, all life on this planet will be brought to a grinding and vicious halt. One such asteroid, 4179 Toutatis, slipped by our planet earlier this week without much hysterics and Mayan doom. The 3-mile-wide asteroid – about as wide as a small island in the Pacific – brushed by us at a distance of 4.3 million miles (18 times further than our moon); or about the length of an eyelash on astronomical scales. If you haven’t already wet yourself from terror, here’s another fact that will send you running to the hills – the asteroid that wiped out the dinosaurs was only 6 miles across; roughly half the size of Toutatis.

The “elongated, irregularly shaped” asteroid had vivid glints on its surface – an indicator that Toutatis has surface boulders. She also rotates on her axis every 5.4 days and wobbles like a broken down Volkswagen on her trip through the solar system. However, you can be rest assured that this beautiful extraterrestrial object won’t impact our planet for another four centuries. She also never posed a threat to us during her recent fly-by. The Minor Planet Centre in Cambridge, Massachusetts has, however, listed Toutatis as a potential risk for the planet, but it’s nothing you would experience in your lifetime.

If Toutatis were to impact the planet, an Extinction Level Event – or E.L.E for short – would occur. An oceanic impact would send miles high tidal waves like a ripple over the planet, extinguishing everything in their path. A jet of dust would be forced into the upper atmosphere that would not only block the sun, but would also break down the food chain and destroy life as we know it. If you’re thinking – Pfft, I don’t live near the sea! I’m safe! – you’re dead wrong. See, an asteroid impact is like smoking – if you survive the initial blast of horror, you’re not safe and comfy; you’re merely waiting to die. It always gets you, no matter where and how you hide. On the other hand, if Toutatis were to hit a continent, tidal waves will luckily not be a worry – fire and brimstone will be. An impact on North America would wipe out the entire continent within a matter of seconds. Those who survive the initial blast of fire and hell will only have to suffer through months of raging fires, lack of basic health, water, and sanitation services, and a relentless, daily survival in the impact zone.

So, dear boys and girls, when you’re walking around in a shopping mall on the 21st of December – the “end-of-the-world” date – just remember that 98% of all species that ever existed on our planet are officially extinct. 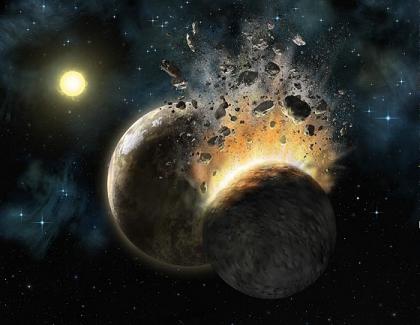 Makes you think, doesn’t it?