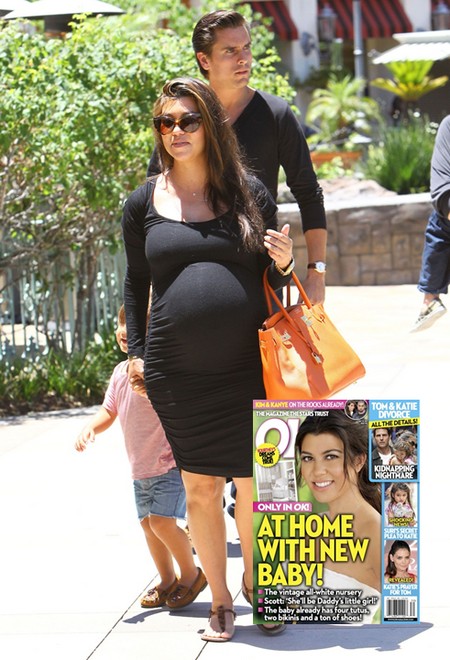 Kourtney Kardashian and Scott Disick’s much anticipated little princess made her way into the world last weekend and naturally everyone wants the details on little Penelope Scotland.  We know that late Sunday night the whole Kardashian crew was tweeting congrats and well wishes to Kourtney and Scott, but what is life now like with the new addition?

Luckily, this week’s new issue of OK Magazine is at home with the family.  Kourtney is very detail oriented and classic so it’s not too surprising to learn that baby Penelope’s nursery is decked out in a vintage white décor.  She has also been born into a long family line of fashionista’s and the little one’s closet already boasts four tutus, two bikini’s and tons of shoes.  Her name may not begin with a “K”, but she’s clearly a Kardashian already.  Dotting dad Scott has naturally already declared her “daddy’s little girl.”

Speaking of the Kardashian’s, this new issue also features a look at the Kim and Kanye West romance.  He is all over the place declaring his love for Kim, but she has yet to really go there.  In his first appearance of Keeping Up With the Kardashian’s he looked all lovey dovey and she either played coy to the cameras or minimized it by saying they were taking things slowly.  I can see that Kanye is into Kim, but I suspect she is looking for fame rather than love with him.

The new issue of OK also covers the latest on the split between Katie Holmes and Tom Cruise.  Katie fears that Tom could kidnap Suri and hand her over to Scientology?  Now that is one that we haven’t heard yet!  You have to admit though, after everything we’ve seen about the cult these past few weeks, stranger things have happened.

Pick up the latest issue for details on these hot stories and more!