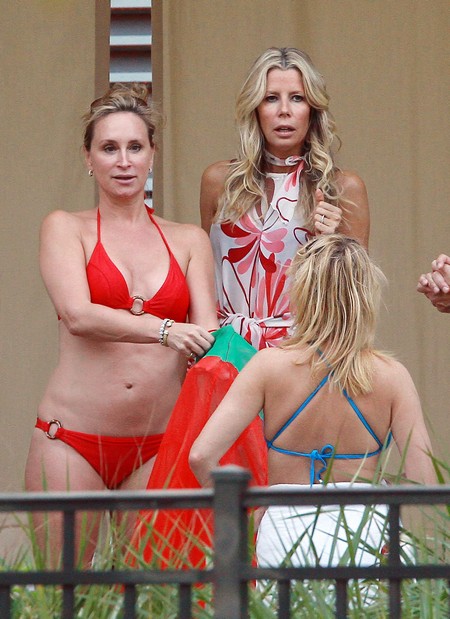 I had just been saying that Real Housewives of NYC is a bit boring and then along came Aviva Drescher with a plan to spice it up.  She actually suggested hooking Sonja Morgan up with her father, who just so happens to be a sex addict.

Aviva is planning a trip to Miami and invited Sonja and Ramona Singer to tag along.  They were discussing plans over dinner on last night’s episode when Aviva mentioned knowing the perfect older man that she’d like Sonja to meet, namely her father.

“I don’t know if this is a good or bad thing,” she said around the table with the other women present. “He’s a sex addict.” Sonja may not think that it is such a bad thing, if she can get past the fact that the man is her friend’s dad!

Speaking of Aviva’s father, he has a way of making people uncomfortable.  Most fathers adore their daughter’s but he took it a bit far saying,

“If I wasn’t your father, boy, I’d be after you.”, to which Aviva responded, “Dad, that’s disgusting.”

Is Aviva nuts to even consider hooking her friend up with her sex crazed father?  Sonja likes older men and Sonja likes wealthy men, but will she like her friends father?  Is a self professed sex addict her speed?  The previews of the next few episodes look pretty interesting and it looks like before having a huge meltdown, Sonja feels that clothing is optional!

Will you tune in to see what happens in Miami?  Tell us your thoughts in the comments below!