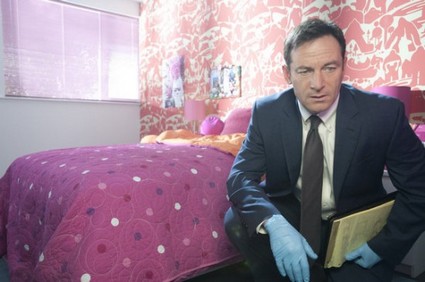 NBC premieres its highly anticipated new drama series tonight called Awake at 10 PM EST.  Stand by as we live blog the show with all the up-to-the-minute details.  The show is billed as an intriguing drama about a detective who finds he is leading an arduous double life that defies reality.   The show stars Jason Isaacs, Laura Allen, Steve Harris, Dylan Minnette, BD Wong, Michaela McManus, with Wilmer Valderrama and Cherry Jones.

On tonight’s episode when Detective Michael Britten regains consciousness following his family’s car accident, he is told that his wife Hannah perished, but that his teen son, Rex, has survived. As he tries to put the pieces of his life back together he awakens again in a world in which his wife is very much alive, but his son Rex died in the accident. In order to keep both of his loved ones alive he begins living two dueling realities.

Trying to regain some normalcy Michael turns to his work solving crimes in both worlds with the help of two different partners, Detective Isaiah “Bird” Freeman and Detective Efrem Vega. He begins to solve impossible cases by using his dueling realities to gain unique perspectives and link clues that cross over from world to world. Helping Michael to navigate his new existence are his bureau assigned therapists Dr. Evans and Dr. Lee.

Awake  airs at 10PM and we will be live blogging it with all the up-to-the-minute details. So make sure to come back to this spot and spend the evening with us!  While you wait for the recap, check out a sneak peek video of tonight’s show here!  Make sure to keep refreshing to get the most current info!!

RECAP: The show begins with Los Angeles homicide detective, Michael Britten and is family in a horrific car accident. Michael is the first one to awaken after the crash. Next he is at a funeral, then he is in front of a therapist. He has gone back to work and has a new partner, just until he is ok because he had a behavioural incident.

A psychiatrist asks if he is ok and he says yes. He’s at the scene of a shooting, he questions a witness, then he goes home. He finds his wife, Hannah Britten who is a paralegal and tennis player, she is painting and tells his doctor that she started redecorating right after the funeral for their son, although she hasn’t gone in her sons room since the funeral, then he wakes up.

It’s morning, he passes his son going to the bathroom, then he is off to school. His son has taken up tennis since his wife’s death.

In each world, he is seeing a different psychiatrists. He is now on the scene of a crime, husband and wife dead, home invasion gone messy. They go into the parents’ daughter’s room and he smells pee, the daughter was in the house at the time of the murder.

The psychiatrists both think that it is fascinating that he has created an entire reality where his son/wife is still alive. He claims both seem real, he can’t tell if he is awake or asleep at this very moment. When he is in his wife’s world, he wears a red bracelet to distinguish it from Rex’s world where he wears a green bracelet.

He is now at work, he watches a shooter shot two times into a cab then stare up into the camera, there is another dead cabby. He is on the scene of the crime, his partner, Detective Efrem Vega, who is a rookie detective tells him that he is there to watch over Michael’s shoulder.

When is with the male psychiatrist in his wife’s world, in his son’s world he has a female psychiatrist. He tells the doctor that his wife wants to move, but he is determined to stay there because for him the room upstairs is not empty.

At work, he figures out that the killing of the parents was a planned abduction and believes the killer has the girl. He heads to his son’s tennis match, he’s actually in the finals. He starts taking with the coach, she tells him that his son misses his wife a lot. His son, Rex, drops down to his knees after the match is over. Later, the three head to a restaurant together, they try to talk but Michael’s pager beeps, Detective Isaiah “Bird” Freeman who he has known for almost 20 years, tells him that they have found the kidnapper’s car.

Rex tells his dad that he is really happy that he was at his match today, they share a hug. At work, Michael is at the scene of the kidnapper’s car, his partner asks how Rex is doing and he tells him how would anybody be if they lost there mother.

Michael is back with his wife, then at work back on the murder of the cabby. His partner mentions 611 Waverly and Michael’s mind starts too go crazy because in his other world, 611 in Waverly near the docks is where they found the kidnapper’s car.

He is with his male psychiatrist, Dr. Lee, he tells him that it is normal that his world’s are crossing over. Michael thinks his worlds are trying to tell him that there is something important out there but the doctor thinks there is no world where Rex is and there is no kidnapped girl. Further he is working on a missing child case because his brain is telling him to face the fact that Rex is dead.

Rex and Hannah are out for the night, she tells him that she has quit her job and is going back to school. They head home and after making love, she tells him that she wants another baby. It’s not about replacing her son, she just wants to have another child, but he wants to give it some thought. He starts to tell her a story about this kid who plays tennis and reminds him of her. She catches on that he is talking about her son and tells him that he is gone and needs to accept it.

He is back with his female psychiatrist, Dr. Evans, she throws him some pages and tells him to pick anyone and start reading, it’s about the constitution which he recites word for word. Michael is more confused about which world is really real. He wakes up and finds that he doesn’t find his bracelet on, he freaks out looking for his wife. He leaves her a message on her answering machine, he goes into his songs room and freaks out. He then cuts his hand with a knife to see if he is real, his wife walks in the room, he is in Hannah’s world after all.

He is back on the scene with Detective Vega, they find the killer and Michael freezes when they go after him, his partner shoots and kills him. Michael looks up and they are at 611 Waverly.

Michael is with Dectective Freeman, they have tracked down the kidnapped girl in a trailer. The killer is inside and he is making some food to eat. The girl sees Michael and he pulls her out of the window. The killer goes after her and Freeman shoots him dead. Michael and Freeman are talking and Freeman is surprised that Michael knew that the killer had red hair, he tells him that it was just a hunch.

Dr. Lee tells Michael that he is having a hard time trying to help him, he also tells him that his blood alcohol level was elevated the night of the accident. He asks him if the reason he is in both worlds is because he is shielding the fact that he may be responsible for the accident. Dr. Lee is really concerned, he thinks that they need to deal with this situation because it is just going to get worse. Michael admits that he see both his wife and son, he also witnessed the two being buried into the ground and he will do anything to get them back together and he will give up his sanity for it, that is the price he is going to pay, he will not let either one of them go.

He is in bed with his wife and she asks if he is going to see his son Rex that night, he answers yes and she asks him to send him a message from her.

That is it for tonight’s episode, how did you like it? I absolutely loved this show, it was awesome!