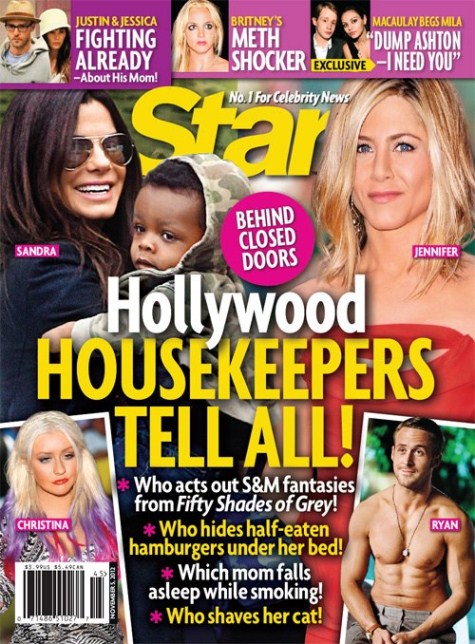 The current issue of Star Magazine features the cover story “Hollywood Housekeepers – Tell All!”  In one of the funniest covers in a long time the magazine makes a lot of outlandish claims about several celebrities that their Housekeepers have spilled.  If you think the cover is pretty funny, wait till you get inside.

When I saw the “Who hides half-eaten hamburgers under her bed” emblazoned on the cover, my guess was Christina Aguilera.  But wait, hold the phone, it’s Britney Spears who is the piggy!  She leaves clothes and half-eaten food all over her house and even under her bed.  What’s wrong with that, you never know when you may want a snack, right???

Who acts out S & M fantasies from Fifty Shades of Grey??  Drum roll…. Jennifer Aniston and Justin Theroux (yawn) The two are trying to spice up their intimate life with masks, whips and chains. The magazine claims “Jen and Justin are having the time of their life trying for a baby and Jen has been totally inspired by Fifty Shades of Grey.”   Do we care, Not really!

Who shaves her cat? Wait that is me… I shave my two Persians, so they don’t get fur balls, is that a crime?  How did Star know, it nothing safe anymore?

Now for the big news hotness himself, Ryan Gosling waxes his chest and back every couple of weeks to keep those magnificent abs looking delectable.  If he was not the perfect man already, there is more, the considerate gent pees sitting down, so he does not tinkle on the seat… What more could a women want.

What would a story be without some Lindsay Lohan dirt?  The actress whose claim to fame is helping herself to clothes without paying, has a locked trunk, of sex toys.  You never know who might want to steal them right? So it seems Lilo, lost the key to her toys, and had to call the locksmith to get her precious cargo out.  The worse new is, Daddy Michael Lohan was listening in and called TMZ…..

For all these hilarious stories and more, pick up the current issue of Star Magazine which is on stands now.