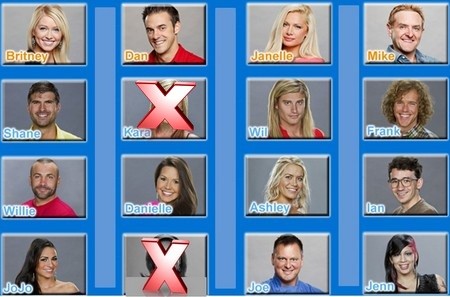 Tonight is another new episode of Big Brother 14 on CBS. Tonight we will get to see who the next house guest is to be evicted. If you missed the last episode, you can read our full and detailed recap here for you.

On the last episode Frank nominated Shane and JoJo for eviction and in the Power of Veto competition where Joe was the host, Shane won the POV. It’s a no brainer that Shane saved himself by using the POV, this forced Frank to come up with another nominee, he choose to put up Danielle.

Shane tried very hard last night to save Danielle and Jojo. His plan was for Frank to put up Wil and backdoor him as he would never see that one coming. One thing Shane doesn’t get, is that Mike Boogie is in charge of the BB house right now and Frank is not going to do anything unless Boogie gives him the ok.

Jojo went to see Frank to plead for her safety in the house. Frank told Jojo that she followed Willie when she shouldn’t have, so basically too bad, so sad for Jojo.

On tonight’s live eviction, one more house guest is going home, my guess is that it will be Jojo, even though she has been campaigning really hard in the live feeds. There are 6 votes this week, with Frank being the tie breaker. They are; Ashley, Wil, Joe, Ian, Jenn, and Shane.   Danielle’s strategy this week is to do nothing to save herself, kind of like what Kara did. Wouldn’t it have been smarter to send her packing, it’s a 2 for 1 deal, Danielle and her coach would be sent home as she is the last player for Dan?

RECAP: The summer has barely begun and already three house guesta are gone, two were evicted and one was expelled. Who will be evicted tonight, Danielle or Jojo and will Dan be he first coach to be evicted?

Danielle is upset so Dan tries to comfort her by telling her that he was just trying to motivate her and now he is going to help her stay in the house. He forgot to remind her that he loses $100,000.00 if she goes home.

Shane and Jojo are flirting hard and heavy in front of Ian. The next morning, Ian tells Danielle that Shane was flirting with Jojo and you know what they say, hell has no furry than a woman scorned. I think Jojo better watch her back.

Danielle confides in Janelle that Shane and Jojo are flirting up a storm which really worries Janelle because she knows how strong a showmance can be on BB.

Britney is already down one player with Willie leaving the game, so she tells Jojo to be quiet and she only wants pink roses and rainbows coming out of mouth before the eviction.

Britney approaches Mike, she doesn’t want Jojo to go home. Mike on the other hand doesn’t want Dan to leave because if the coaches get to play in the game, he is a strong player to have on his side.

Julie Chen gives a look back at Willie’s meltdown; Joe claims that Willie head butt him but that is not what I saw on the video, Willie clearly shouldered Joe after he was intentionally taunted by him.

Dr. Will gives us his thoughts on the game. Dr. Will Kirby was on Big Brother 2; some alliances stab you in the back, Chilltown stabs you in the front. Dr. Will thinks Boogie is moulding Frank into Frankenstein. He gives a little advice to Boogie not to be too egotistical. Dr. Will thinks that if Kermit the Frog and Ryan Seacrest had a baby, Dan is what it would look like. Will thinks Britney is doing a terrible job coaching if one of her players was expelled for violence. Who does Dr. Will think will win the whole game? Ian.

It’s time for the HOH competition called “thin ice”, one by one, each contestant will take their shot and shooting a puck in the net and try to get the highest number, the winner will be determined by the person that gets the highest score.

Julie congratulates Shane on winning HOH, then she makes an announcement to viewers, “the coaches are competing for $100,000.00, do you want to make them remain as coaches, or would you like them to join the game and compete for the $500,000.00.”. It is all up to America, the power is in their hands and they get to call in and place their votes. The results will be announced on August 2nd.