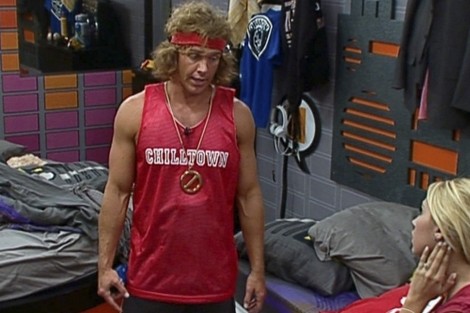 The last episode of Big Brother was a double eviction and both Mike “Boogie” and Ashley were sent home. The Quack Pack tried to oust Frank, but the guy is to slick for them, he keeps winning POV and taking himself off the block and now he’s vowed to get back at them because they voted off Boogie.

Spoiler alert: If you’re one of those people who doesn’t like spoilers, stop reading now! We have some juicy spoilers for you about Big Brother 14 week 7.

After the last show, there was another HoH competition and Frank won which ignites some serious backstabbing and deal breaking.  Frank takes the risk and opens Pandora’s box; quarters were spread around the house and each HG had a turn at finding them, then going to the machine to retrieve a magic ball.

Frank wins $3,000.00, Ian won a special Veto and can remove a nominee off the block.  At the nomination ceremony, Frank nominates Dan and Danielle for eviction.

I had hope for Frank, but it appears that without Boogie, Chilltown is dead. Frank now believes that Britney and Shane are now working with him. Yep, he believes the two people that nominated him twice already are now trustworthy. Do you think Frank made the right choice? I think he should have nominated Britney and Dan.

At the Veto competition, the players are Frank as HoH with Dan and Danielle as nominees, Shane, Britney and Jenn were chosen to compete and Ian hosted. Jenn wins, finally and she doesn’t plan to use the PoV on Danielle because she thinks she has the votes to stay. Looks the Quack Pack is going to finally dismantle because Dan is likely to be going home.

Along with all the wins and losses this week, Dan was punished with 24 hours in solitary confinement,  Frank gets to wear another suit – a carrot one this time, Danielle and Britney are chained together for 24 hours and get this, Frank can’t compete in the next two HoH competitions as a punishment.