Bill and Giuliana Rancic Are Having Another Baby! 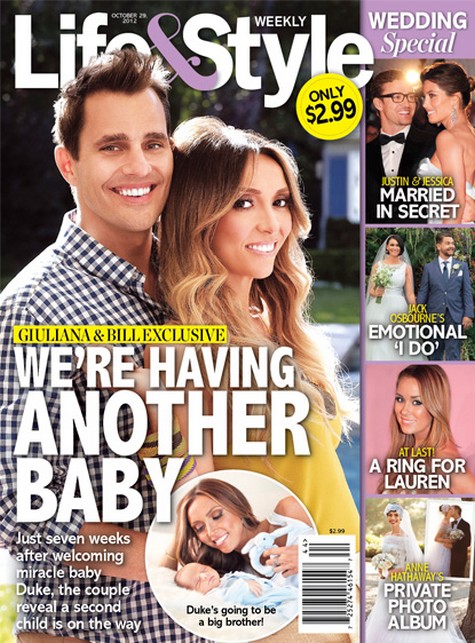 This week’s Life & Style cover story is an exclusive announcement of pregnancy from Giuliana and Bill Rancic. Their son Duke was born seven weeks ago by surrogate, after the couple struggled with fertility issues while Giuliana faced breast cancer.

“We’ve got a few embryos on ice. They’re ready to go!” Giuliana tells Life & Style. “A lot of people have one kid and it’s enough. But for us, we’re just having so much fun that we’d love to have another child.  And they’re not just thinking about it. “The wheels are in motion.  We already have plans in the works!   “We’d have to go down the surrogacy path again. Thankfully, before I went on my medication, we did another round of [in vitro fertilization], so we have embryos ready to go.”

In this week’s Wedding Special find out all the secret details of Justin Timberlake and Jessica Biel’s private wedding. For months the couple claimed they were in no rush to wed, and then suddenly, they were! This seems to be a new trend in Hollywood—consider Blake Lively and Ryan Reynolds, or the small and nature-y wedding of Amber Tamblyn and David Cross. Anne Hathaway kept her wedding secret until a few days before her walk down the aisle. Check out a photo album from Anne’s wedding too.

Jack Osbourne gets married to Lisa Stelly just months after being diagnosed with multiple sclerosis. The diagnoses was so unexpected that sister Kelly Osbourne got drunk on an airplane, causing many to speculate that she may be seeking counseling services again.

Rihanna’s friends fear for her safety ever since she began seeing ex boyfriend and famously violent Chris Brown. He beat her up in 2009, but apparently that isn’t enough to deter her. Find out what Rihanna’s dad thinks of the match.

To find out all about Bill and Giuliana’s baby # 2 and more in this weeks issue of Life and Style pick up a copy of the magazine, on stands now!