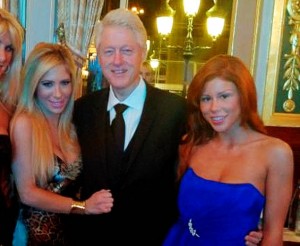 According to TMZ, Reign and Lee were both at the Nights in Monaco fund-raiser which was benefitting the William J. Clinton Foundation and the Prince Albert II of Monaco Foundation on behalf of Marc Bell, the CEO of Penthouse magazine.

Lee, of course was disappointed when Secret Service denied them access to Clinton for a simple meeting. But to their good luck (fluttering eyelashes and ample bosom), Clinton had noticed the women sitting at their table oh so innocently. Lee told TMZ, “The Secret Service guy wasn’t having it, but then (Clinton) let us come over.” Not only did they get to meet the President, they had a mini-conversation AND a quick photo-op. Lee added, “I just said he was a great President. He just kind of winked and smiled and gave us hugs.”

Reign then threw in her two cents saying, “I hope this doesn’t hurt his re-election or whatever he’s trying to run for.”

Good old, Bill! He sure aims to please, doesn’t he?