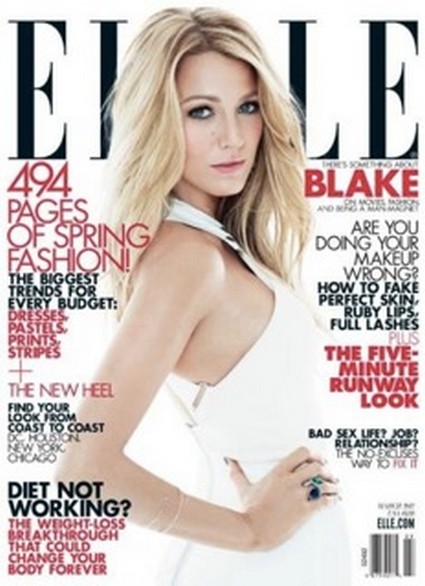 In doing nothing to disprove my theory that she is a sexy robot from the same planet that all Victoria Secret models hail from, the beautiful Blake Lively is featured in March’s Elle Magazine. Wearing a tight white Victoria Beckham dress on the cover, the 24-year-old actress— best known for her role as Serena on the CW’s Gossip Girl— posed in some designer duds inside the magazine and opened up about love, fashion, and babies.

She dated Leonardo DiCaprio in the summer of 2011 and is now getting hot and heavy with Scar Jo’s Ex-hubby Ryan Reynolds. But even though she has been linked to some of the hottest men in Hollywood, and gave a convincingly whorey performance in The Town, Lively swears that she doesn’t sleep around. “I’ve had four boyfriends in my whole life,” She says in an excerpt from ELLE.com. “I’ve never been with anyone that’s not a boyfriend. If I spend time with a man, it’s because there’s somebody that I know well who has been a friend for a while.“

Usually tight-lipped about her love life, Lively did respond to the rumor that she and Reynolds are looking for an apartment on Fifth Avenue in NYC: “Newspapers say a lot of stuff, don’t they? Though I wish I could afford half the places that I hear I’m looking at.” Let’s hope she can afford a place with big enough closets to hold all her enviable sartorial finds. Apparently, the starlet is such a collector, that she’s praying to one day have someone to pass it all down to. “I hope to have a few girls one day. If not girls, they better be trannies,” she said. “Because I have some amazing shoes and bags and stories that need to be appreciated.”

One of her “stories” could be about her friends in high fashion places, who apparently save her the services of a stylist. As if I wasn’t jealous enough, Lively tells the mag, “When I’m going to an event, I’ll send Christian (Louboutin) a picture of my outfit and say, ‘What shoes do you think I should wear with this?’”

The March addition of ELLE Magazine featuring Blake Lively hits newsstands on Feb 14th 2012. That’s right, you can spend all of Valentines Day obsessing over your arm fat while eating your cheap drugstore chocolates. Thanks ELLE!