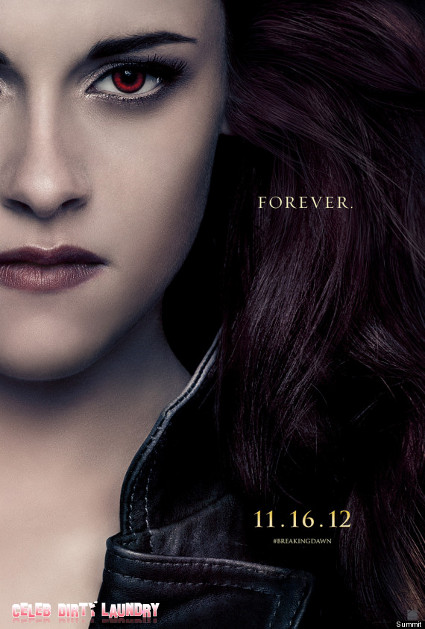 New character posters for Twilight Breaking Dawn Part 2 have been released, and each image features characters from that supernatural trio any reasonable Twihard would consider family. Let me just tell y’all one thing: the photos are filled with a whole bunch of vampiric awesomeness!

Bella (Kristen Stewart) is shown with a pair of red eyes, and we all know what that means . . . #immortality. Also featured in their own posters are Jacob (Taylor Lautner) and the sparkly-dude himself, Edward (Robert Pattinson).

The Twilight Series, which is based on the series of books by Stephanie Meyers, has quickly become a billion-dollar franchise and the empire continues to grow. The movie seems like its lightyears away but the premiere will be here before we know it. We’ll have to wait until November 16th to marvel at Kristen Stewart’s awkwardness and suffer through Taylor Lautner’s extensive brooding, but until then we’ll continue to supply you with the latest promo pics and Twilight goodies the studio releases.

CLICK HERE TO SEE WHAT YOUR PALS R-PATTZ AND K-STEW ARE UP TO!

Take a look at the pics and let us know what you think!