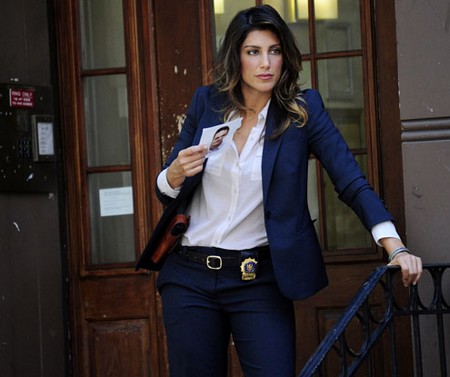 Jennifer Esposito let her temper flair after CBS released a statement about her employment on the show Blue Bloods.  The former Mrs. Bradley Cooper joined the show in 2010 as Detective Jackie Curatola. She appeared in 42 episodes of the cop drama Blue Bloods before having her screen time taken away due to complications due to Celiac Disease. Jennifer’s doctor requested she reduce her schedule and CBS complied by taking her of the show.

Jennifer tweeted “CBS knows [they] PUT me on unpaid leave and has blocked me from working anywhere else after my doc said u needed a reduced schedule due to celiac. CBS didn’t listen to my doc and I collapsed on set. Which everyone saw! After a week off my doc said I could return to work but CBS implied that I was NOT truly ill and this was a scheme to get a raise!  It’s been almost two months without bringing me back to work + keeping… Me from working anywhere else! So no that article is not telling you the truth. Absolutely shameful behavior.“

Jennifer is receiving tremendous support from fans and from her foundation Jennifer’s Way (jennifersway.org). She was diagnosed with the Celiac Disease in her mid 30’s and set up her foundation to help others find a diagnosis and make lifestyle changes to manage the disease. Celiac Disease is an intestinal condition where a person has trouble with foods that contain gluten. Gluten is a kind of protein found in foods like bread, crackers, and pasta. With celiac disease, your immune system attacks the gluten and harms your small intestine. The condition is managed with diet modifications.

Guest stars will fill Jennifer’s role until she is reinstated. CBS has not announced when they will bring Jennifer back to the show. Blue Bloods is one of CBS’s top rated shows thanks to Jennifer so why mess with a winning formula? Time will tell how the show will fare without her. Jennifer’s last appearance will be on November 2.