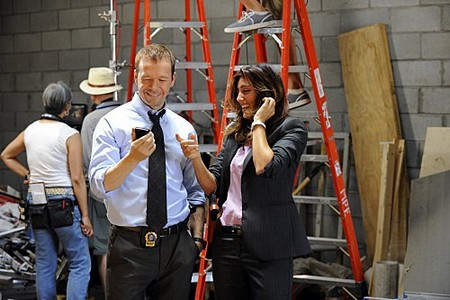 A whole new episode of Blue Bloods airs tonight on CBS and the episode is called ‘No Questions Asked.’  On last week’s episode Erin prosecuted a woman accused of killing her husband, the defendant’s attorney was murdered and Danny was assigned to the investigation. When Danny was put on the stand to be questioned, things get heated between the brother and sister.  If you missed the episode you can read our full recap here!

On tonight’s episode Danny faces a moral dilemma over whether to arrest a suspect who may be linked to a robbery. The difficulty arises when the man brings in a gun used in a theft. But Danny isn’t allowed to question the man due to the NYPD’s gun-buyback policy, which doesn’t allow any questions to be asked about the weapon.

Meanwhile CBS announced the finale date for Blue Blood – the season finale will air on CBS at 10PM EST Friday May 11th, 2012.  The finale will end with – Frank (Tom Selleck) racing against the clock when he learns there’s solid intel indicating a terrorist attack, but no indication of the place or means.

Blue Bloods ‘No Questions Asked’ airs tonight at 10:00pm ET and we will be live blogging all the details. So don’t forget to come back and refresh your screen often for live updates. While you wait for the show – check out the sneak peek video of tonight’s episode HERE and let us know what you think of the season so far!

RECAP: Frank arrives at the office and is upset because Reverend Darnell  Potter was waiting for him. Garrett tells him the Potter comes with the deal and the gun-buyback policy is a good thing.

There is a robbery in a pharmacy, one of the robbers hits the Pharmacist in the face with a gun and tells him to open up a safe. One guy tries to fight the robber and gets shot.

Danny is on the scene of the crime, witnesses think that one of the robbers was nice, but the shooter wasn’t and he was using a colt 45.

Potter is outside city hall speaking about the gun-buy back program. Danny is with Erin and she thinks it is only a matter of time before one of the robbers gives up his friends.

Diane is at the cafeteria at school, she is flirting with a guy and her friend tells her she is terrible. All of a sudden everyone receives a text with a picture of her with half her clothes off in the bathroom, Diane runs out of the cafeteria with everyone laughing at her.

Potter is outside city hall laughing and shaking hands with people when Garrett walks up and tells him that he is wasting tax payers dollars.

A black guy walks into the precinct and gives up a gun for the gun-buyback program, one of the officers has a cell phone, Potter asks to see her cell phone because he thinks she took a picture of the guy that brought the gun in to sell. Garrett comes to the officer’s rescue, looks at her phone and tells Potter there is no picture on it.

Later, Danny questions the officer and she did take the photo, she tells him that she is a cop first before respecting the gun-buyback program.

Danny got the leads from his gun guy, he tells Erin that he is not using the picture of the guy because it is wrong.

Garret is meeting with Frank, he tells him that they got 500 guns off the street and Frank wants to what the problem is. He tells him about Potter catching the cop taking the photo when he was turning a gun in. Frank wants to talk to the officer.

Danny is meeting with the guy who got shot in the pharmacy, showing him some photos and wants to know if he recognizes any of them. Erin arrives at the hospital, the gun that was turned in for the buyback is the same gun used in the robbery. Danny is struggling with this info, he has the photo of the guy who turned in the gun. They get an artists impression, part thankfully to the victim and to Danny.

Nicki keeps trying to call Diana and she is not picking up her phone. She confides in Jamie and tells him that she is upset she did nothing, he tells her that it is what she does next that is important.

Frank meets with the cop who took the photo, he confronts her about the run in with Potter. Garrett thanks her for treating him with respect despite his accusations. She tells Frank and Garrett the truth, she did take the photo and she apologizes to Frank.

Danny and Erin find their man, Benjamin Banks. Frank meets with Danny and Frank doesn’t mince words, he wants to know how they found Benjamin Banks. Frank slams the photo down on the table of Banks and asks if he used it. Danny tells him not really, he merely suggested a likeness for the artist’s impression and if that is what it takes to get a bad guy off the streets then he is going to do it.

Danny lets Banks out of jail. Erin tells him that she was at the hospital and the victim doesn’t recall Bank’s likeness.

Nicki is at school and meets Diane, she really wants to make it up to her. She tells her that her uncle Jamie is trying to find out who sent that text to everyone and Diane tells her no, she just wants to forget all about it.

It’s late at night, Danny tells Erin that each witness was saying the same thing, one of the robbers had compassion. Officer Perez, the only who took the photo, is back to see Frank who tells her that she is going to be disciplined for what she did, it was wrong, even though her instincts were good and he would ride in her car any day. Garrett asks Frank if he is going to tell Potter that Perez took the photo and he says the truth will set you free.

Danny looks at security footage of the hospital hall ways, he is convinced the compassionate robber went to check on the victim, he was right, they have the footage and it’s Benjamin Bank’s brother Terrance.

Danny and Erin are after Terence, they catch him and cuff him. Benjamin tells them that it’s not his brother’s fault, but Danny takes him in anyway.

Nicki meets up with Diane in school, she wants to tell her what she found out, whoever posted the pick put up some firewall and it’s not traceable. Diane thanks her and admits she did it, they are still friends.

Frank meets with the mayor and Potter, the gun-buyback program was a success. There are 500 guns off the street and Frank thanks Potter, but tells him that there was a hiccup. He tells them that one of the guns was from a recent robbery, then he tells the mayor that the information is only “need to know” so he isn’t going to tell them. Potter tells him his grandmother used to say “only fool goes looking for rain in a rainstorm”.

It’s dinner with the family, Danny and Frank are sitting together and Frank tells him that he has always been lucky and Danny is a lot like him, he doesn’t want his luck to run out. At the table, Danny wants to say grace.